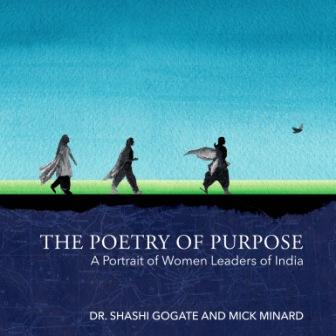 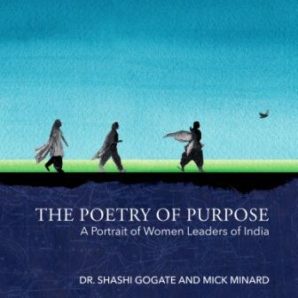 New Delhi:  Capturing the lesser heard but more relevant nature of women’s leadership in India, the exhibition titled The Poetry Of Purpose: A Portrait of Women Leaders of India is an exhibition by American photographer Mick Minard – also an established strategy and communications consultant – who here exhibits photographic portraits of fifteen women leaders across India. The exhibition will be accompanied by a book with the same title which Minard has co-authored with Dr Shashi Gogate who has been practicing medicine in the US since mid 1960s. The exhibition, curated by art historian Dr Alka Pande, will be shown at Open Palm Court Gallery, India Habitat Centre, New Delhi from March 25 to March 31, 2015. 10 a.m. to 8 p.m.

Women leaders featured in the book and the authors will be present during the opening of the exhibition on March 25, and join in welcoming the Guest of Honour Mr. Jawhar Sircar, Chief Executive Officer of Prasar Bharti. The book will be released by Mr Vinay Sheel Oberoi, Secretary, Ministry of Women And Child Development. Mr. Michael Pelletier, The Deputy Chief of Mission at the American Embassy will open the exhibition.

The primary collection of photographs in the exhibition are of women leaders across India who- “often in the face of their own social, political, familial and economic challenges – are scaling the heights of human spirit, and improving the lives of ordinary people in extraordinary ways,” says Minard. And even though this is a small selection from the thousands of photographs Minard made on her visits to areas as diverse as the “transit camps in Mumbai to the slums in Lucknow to the farm fields of Alwar and the ball fields of Rohtak”, each one has a tale to tell. For these women, in the authors’ words, “celebrate selfhood through sport; use business as an act of compassion; recognize women farmers as entrusted land stewards; use education to build moral imagination; spread the values of social justice and human rights through song and slogans; promote girl’s education as a pathway out of poverty and toward equality; accelerate rural development through radio; inspire collective action through film; restore dignity by providing affordable healthcare; and enrich people’s lands and lives through cooperative, door step banking.” And the list goes on. “There is a paradoxical, ‘known-yet-unknown’ status of many of India’s most influential women,” Minard says, “while many of India’s pioneering female leaders are ‘invisible’, caught in the ether of unequal liberty even if their works are not, others are known, even celebrated nationally and internationally by experts focused on their particular issues, and yet are barely known to the wider public.”

Dr Alka Pande, curator for the exhibition at Visual Arts Gallery avers, “The exhibition, and the accompanying book, look at Indian women through a completely different and unique lens and will go a long way in providing visibility to women leaders who are helming ground-breaking work and helping to shape India’s future.”

Says Mick Minard about the exhibition and their new book: “We live in an era in which inequality, gender violence and social injustice are on the rise—especially in India. Our aim in shining a light on these women, and their stories, therefore, is to demonstrate that despite such difficult realities, there is cause for optimism. We selected women leaders who conveyed an honest and inspiring portrait of human potential—where body, mind and spirit each have been awakened. Rather than exhaustively reporting the details of each woman’s biography, we chose to offer a personal and reasoned account of her aspirations and empowerment to break gender barriers and achieve greater agency to establish herself as a leader. To do so, we paired storytelling and photography—both art forms known for their capacity to capture the human experience.”

After homing in on the fifteen women featured here, ( a process that the authors outline in theirbook), it took Minard and Gogate two years to finish their research, which included five weeks of fieldwork in January 2013 and April 2014 and another year to complete the book.

Adds Dr Shashi Gogate: “Over the last thirty-nine years, my daily meditation practice has deepened along with my lasting affection for Mother India, and has helped me to reflect on the significance of self-discovery, self-sufficiency and self-restoration in the unfolding of one’s powers and one’s potential as a human being. This reflection has happened alongside reports of India’s deep poverty, violence and human suffering, which seem to intensify each year, especially in regard to women and girls; where education, a supportive and secure living environment and good health is promised to all but delivered to few raises questions about both basic justice and hopes for prosperity in my native India. In support of each woman’s pursuit of a meaningful life, however they define it, Mick and I have set out to reveal to the world fifteen of India’s women leaders who are transforming lives and accelerating peace and prosperity in their communities, but whose influence has yet to be communicated on a large scale.”

This project, it seems, has grown in scale and also in potential influence since Minard and Gogate kicked off the project, here Minard shares the highest purpose of the exhibition and the book: “Through these women’s stories, as told in words and photographs, Dr. Gogate and I hope that all of us might become more perceptive readers of humanity’s potential, and that we might begin by cultivating an ability to comprehend others’ stories through a prism of love and compassion, rather than solely through data and logic. In so doing, we might come to recognize that humanity’s potential is much greater than current social realities would have us believe. And we might appreciate, too, the extent to which women’s leadership represents a new frontier of possibility that will always be with us — one that already is restoring a great faith in human nature, along with a strong desire to know what goodness there is in the world, so that we might shine a light on it for all to see.”