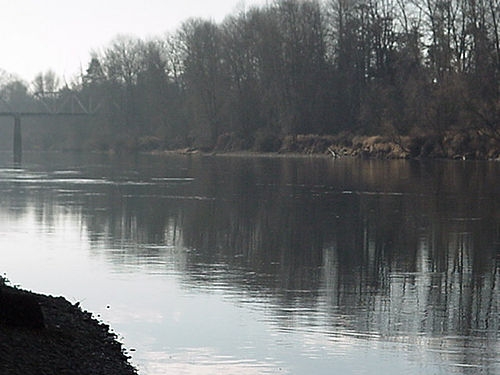 Posted signs at Bowman Park in northeast Albany, Oregon, warn against coming near the water.  They have been there since November 24th, 2006, when heavy, seasonal rains led to the release of dilute, raw sewage from the Albany Wastewater Treatment system into the Willamette.  Despite recent dry spells, the signs have remained in place.

If Albany’s drinking water comes from the Willamette, as indicated by stencils on storm sewer grates just outside the park and elsewhere in town, is the drinking water safe?  According to Marilyn Smith, Public Information Officer for the City of Albany Department of Water Works, “Absolutely.”

Regarding sewage discharges and other microbial events, Smith said, “We disinfect and filter all water coming in for treatment.  The process takes care of all but the highest levels of [microbial contamination] well before injection into the distribution system.”  She added, “Most of the fecal matter we deal with comes from cows – not people.”

In Oregon, public drinking water systems are subject to the Oregon Drinking Water Quality Act [ORS 448 – Water Systems] and the federal Safe Drinking Water Act.  Every year, as many as 40,000 samples of Albany’s drinking water are taken and analyzed.  Since 1999, only one sample contained detectable levels of coliform bacteria (an indicator of microbial contamination), and no samples were found to be in violation.

Of the 2,706 public water systems in Oregon, only 278 water systems get their water in whole or in part from surface water supplies, as does Albany.  Generally speaking, surface water requires much more treatment and processing to ensure safety for drinking than does groundwater.

Using an old canal to supply a city of nearly 50,000 residents with drinking water has advantages and disadvantages.  Diverted from the Santiam River (a tributary of the Willamette) just east of Lebanon, the source water avoids many of the industrial contaminants and dioxins found in Willamette River sediments.  Unfortunately, it meanders uncovered through nearly 20 miles of high-input agriculture, including animal operations.

According to Smith, microbial contaminants such as viruses and bacteria may come from sewage treatment plants, septic systems, agricultural livestock operations, and wildlife.  Most investigated contaminations of the Santiam since the 1980s have been found to be a result of surface run-off from farm animals along the canal’s path.

Mike Wolski, Operations Manager of the Albany Public Works Department, explained how events such as those of November 24th might happen.  “When it rains hard, water seeps into the sewage input pipes through cracks.  When you’ve got too much volume in the pipes, it means too much water in the [treatment] lagoons, and they spill over.”

Overflow of raw sewage is a surprisingly common even along the Willamette River.  Portland is the worst offender, with several hundred small discharges between 1999-2001.  During that same time, Albany registered 12 such discharges.

The Oregon Department of Environmental Quality (DEQ) requires all cities along the Willamette to reduce sewage discharges to only serious storms, called “five-year events.”  According to Wolski, Albany has reached an agreement with the DEQ to comply by 2009.  Additionally, reports of each sewage release must be filed with the agency along with daily samples of the affected water and the public must be alerted by news releases between May 1st and October 31st.

By way of comparison, Portland has been working on a big dig of its very own, known as the Combined Sewage Overflow project, expected to be complete in 2011.  Having just reached the east side of the city, the project is estimated to require over $1.4 billion dollars.  When done, the “big pipe” is designed to handle at least 50% of sewage discharge volume until 2020.

The largest threat to water quality in the Albany system is the deterioration of the distribution networks.  While the cast iron and concrete/asbestos pipes from the turn of the 20th century remain intact, steel pipes from the Works Progress Administration projects of the 1930s have broken all over town.  This includes storm and municipal sewage as well as drinking water lines.  Thirty of the 190 mains carrying treated drinking water leak severely and about 25% of water entering the system seeps back into the ground.

The city has funded replacement of the worst leaks of both systems with nearly $17 million through 2006.  However, this does not address all the steel pipes, the current un-funded cost of which is nearly $16 million.

The Albany City Council is currently saving money to deal with a catastrophic failure of the system, but continued replacement beyond 2006 may require another bond measure to secure funding.  Sewage treatment plant upgrades to handle the projected area population of 2020 will cost an estimated $59 million.  Funding for this was secured in 2002 despite Linn County having the highest unemployment rate in the state.

Wolski is optimistic about the improvements.  “Five years from now, I don’t think I’ll have to issue any more warning bulletins.  Once those pipes are replaced and the system is expanded, our lagoons should handle the load.”