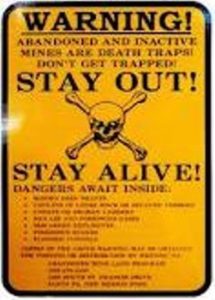 Abandoned hard rock mines pose a serious problem in America, so much so that it poses a environmental threat. It is a problem that affects many parts of Colorado as well as other western states, including Arizona and California.

The Government Accountability Office estimates that there are over 160,000 such abandoned hard rock mines in the West; 7,300 are in Colorado, 47,000 are in California, and another 50,000 are in Arizona. These are just the ones we know about…

These hard rock mines pollute thousands of miles of streams and rivers in America with truly a poisonous brew of heavy metals, including arsenic, lead, and mercury. That pollution impairs drinking water and kills aquatic and plant life for miles downstream.

Even today acidic water still leaches from these mines, polluting entire watersheds, in some cases.

This is a problem that doesn’t get enough attention either in the so called “mainstream media”.

From Environmental Protection Agency data: “we can conservatively estimate that over 10,000 miles of streams and rivers and nearly 350,000 acres of lakes are impaired in this country as a result of acid mine drainage.”

The problem has gotten so bad that Congress needs to get involved to set aside funds to fix this situation.

For reasons that deny logic Congress has otherwise refused to act to do what is right in this case.

Their inaction has put at risk the environment, as well placed at risk numerous watersheds on which people depend for fresh water.

To insure the safety or people, property and American watersheds Congress should act. This will cost money – lots of money.

“How much does it cost to clean up an abandoned mine? That depends on the individual site, of course. Some might be cleaned up for as little as $50,000, using simple landscape grading that channels running water away from mine sites. Some mining districts, however, have contaminated entire watersheds. These require more intensive and ongoing remediation efforts, including the construction of water treatment plants. These more difficult cases might each cost $200-$300 million or more just for the cleanup, plus millions annually for ongoing maintenance”, says T. Cleaver of Charlotte, N.C. a self taught mining expert and environmental activist for 35 years.

“If the pollution poses an immediate threat to human health, the Environmental Protection Agency may designate a mine as a Superfund site under the Comprehensive Environmental Response, Compensation, and Liability Act (CERCLA). Signed into law in 1980, the Superfund statute initially provided funding through a tax on the chemical industry. Congress, however, failed to reauthorize this tax in 1995, terminating this source of cleanup funding. Now projects done under CERCLA authority depend in part on general congressional appropriations to various federal agencies such as the EPA. It therefore will take an act of Congress to get it done. Realistically speaking without payoff money, in the form of millions of dollars in campaign donations to corrupt Congressional leaders the chances of getting anything like this done is slim to none”, he said.

Filed under: News, US
Share Tweet Pin G Plus Email
previous article: Whistle-blower cases still are one of the “primary tools” to fight fraud in healthcare
next article: Did Steve Jobs smoke pot? FBI says yes!