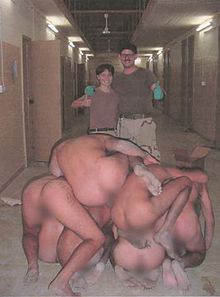 SPC England and SPC Graner posing behind a pyramid of naked Iraqi prisoners, giving the “thumbs up” sign and smiling? A sign of undiagnosed mental illness? Probably!

There is a lot of undiagnosed mental illness in the military – I saw it first hand during my time in service in the mid 1980’s, when I served with the 2-508th Airborne Infantry, 82nd Airborne Division at Ft. Bragg, N.C.

Admittedly it was a subject rarely discussed at the time but deep down many people recognized it as a huge problem among some of the unit’s officers and enlisted ranks.

I don’t know – I suppose its the nature of the beast that draws certain segments of society to join the military in the first place, particularly within the combat arms, like infantry and marines.

This is especially true of those individuals who seem to be at times literally obsessed by the whole idea of killing and murdering people.

These people were found of such sayings as “Kill em all – Let God sort them out.” I remember one person in our unit actually prayed to go to war. On divisional alerts, cause by some crisis in the world when we were ordered to be on heightened alert for possible rapid deployment around the world, this man would express excitement and joy at possibly going to war and killing people.

Our company commander at the time held him as an example of someone properly motivated and he was promoted ahead of others more qualified. This man was also very popular among the other soldiers and officers in our unit, who would laugh when he talked about how he kill the enemy on the battlefield even irregardless if they wanted to surrender or not. This process I recognized immediately as “dehumanization” and its a warning sign that you have a serious problem on your hands. Its also incidentally an essential first step in creating serial killers and murders.

I personally despised the guy and thought he was more of a liability to our unit than anything else.

One one occasion he bought an extra large knife with serrated edge that he claimed he would carry into combat if we were ever deployed to war. I asked wasn’t his bayonet good enough to kill people you want more? I also warned him that if the enemy ever caught him with such a weapon they would gut him like a fish with it right on the spot. And by carrying such a weapon he jeopardized the lives of others in his unit.

Years later he wound up murdering some guy down in Fayettville, N.C. with a knife in a vicious bar fight and as far as I know is still serving a sentence in prison.

It didn’t surprise me however I knew he was a psychopath to begin with! This was also a man the company commander was recommending go to West Point military academy or Officer Candidate School.

For years I have thought the military should do a better job at screening out certain people who join the ranks. I still believe that today.

I also believe we should be teaching new recruits ethics and morals. And conducting classroom instruction on the Geneva Convention, the proper treatment of prisoners of war, and what constitutes an “illegal order”. As well what a person should do in such a case.

Its an area that, even today is severely lacking within the military.

It is reflected in incidents and situations that “pop up” from time to time – like the abuse of prisoners at Abu Ghraib in Iraq or the use and justification of torture at Guantanamo Bay, Cuba, which incidentally was approved at the highest levels of the US military and the Pentagon and was carried out by the mid level and junior grade officers and medical personnel including psychiatrists/psychologists serving in the military.

See also video: Abuse of prisoners by US soldiers in Iraq http://www.youtube.com/watch?v=NVolRm1iqBY

In my mind torture and abuse of prisoners constitutes a form of serious mental illness that reaches all the way to the very highest levels of leadership at the Pentagon and the White House.

Filed under: Military, News
Share Tweet Pin G Plus Email
previous article: On the nature of evil and the reality of the unseen
next article: Sequester rears its ugly head again