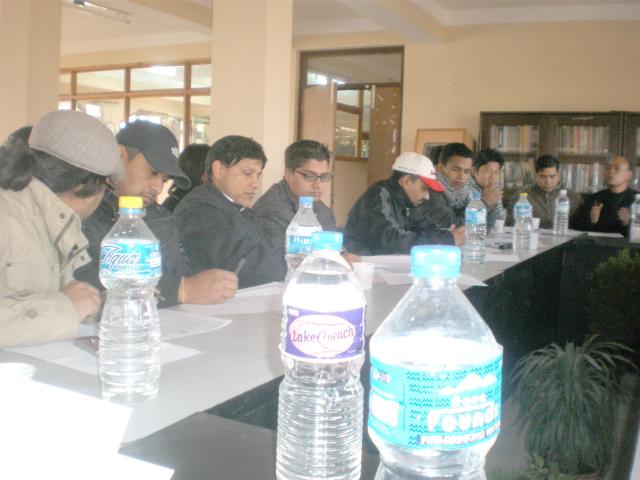 All human beings are born free and equal in dignity and rights. They are endowed with reason and conscience and should act towards one another in a spirit of brotherhood (Universal Declaration of Human Rights Article 1)

Human rights are not granted by anybody or any power. All human beings want to be treated with equal respect and dignity because they are the living beings with reason and conscience. They can use wisdom. Therefore, they are different from other animals on Earth.  The differences cultured by the political and socio-economic settings of human society must not be the basis for unfair and discriminatory treatment. All the human beings, due to their birth as human beings, have the same natural or inherent rights regardless of their race, political or other opinions, sex, religion, language, national or social origin, economic status, or any other basis.

Internalization of the Universal Declaration of Human Rights (UDHR)
Journalists, as they are the all-time representatives of people, need to internalize the most fundamental rights not only for the sake of writing themes but also for working as effective journalists.

• Right to work, to free choice of employment, to just and favorable conditions of work and to protection against unemployment
• Right to equal pay for equal work
• Right to just and favorable remuneration
• Right to form and to join trade unions for the protection of his interests.
• Right to rest and leisure
• Right to a standard of living adequate for the health and well-being of himself and of his family, including food, clothing, housing and medical care and necessary social services, and the right to security in the event of unemployment, sickness, disability, widowhood, old age or other lack of livelihood in circumstances beyond his control
• Right to education
• Right freely to participate in the cultural life of the community, to enjoy the arts and to share in scientific advancement and its benefits.
• Right to the protection of the moral and material interests resulting from any scientific, literary or artistic production of which he is the author.

Internalizing the Spirit of Human Rights for their implementation

The Universal Declaration of Human Rights (UDHR) clearly speaks that the nations’ collective commitment to the peoples’ human rights does not imply the freedom of any individual or institution to violate any of the above rights. The following provisions, as bulleted in the box, elaborate how the human rights declaration is geared towards positive ends:

• Everyone has duties to the community in which alone the free and full development of his personality is possible.

• In the exercise of his rights and freedoms, everyone shall be subject only to such limitations as are determined by law solely for the purpose of securing due recognition and respect for the rights and freedoms of others and of meeting the just requirements of morality, public order and the general welfare in a democratic society.

• These rights and freedoms may in no case be exercised contrary to the purposes and principles of the United Nations.

• Nothing in this Declaration may be interpreted as implying for any State, group or person any right to engage in any activity or to perform any act aimed at the destruction of any of the rights and freedoms set forth herein.

The core journalistic principles of accuracy balance, credibility and a sense of social responsibility equally apply to human rights journalism and media analysis. A mere coverage of incidents would never do justice to the human rights approach to journalism. Since the journalists and the mass media are the key information selectors, processors and disseminators on human rights issues and events (like in other areas), undermining their role and accountability affects the overall human rights standards of the society.

Although journalists and media have more or less covered human rights issues in their reporting and writing, this cannot be adequate in a society where victimization process has been all-pervasive and inseparably attached to the psycho-social settings of power-players of the country. To deal with such a serious area of human rights communication, information players have to equip themselves with an adequate repertoire of knowledge about their own society. Rather than parroting what has been taught from the very beginning, trying to master the existing ground realities of the society become extremely helpful in becoming better human rights journalists.

Grasping the spirit of human rights means internalizing the truth that real democracy is inalienably concerned with the implementation of human rights from political, socio-economic and cultural perspectives.

Journalists seem aware of the growing trend of misusing the human rights field as fraudery industry rather than independently working to create a human rights-friendly atmosphere in the society. There is a bitter feeling that victims’ genuine issues, especially related to conflict in the country, have been under-attended to. The tendency of running after politics and leaders has helped to neglect other vital human rights issues in the remote parts of the country. Moreover, no reconciliation strategy has yet been made to address the ongoing human rights violations.

A piece of journalistic confession is that journalists usually end up  by reporting and writing about routine and comfortable things while so many vital human rights issues do not find any place. Therefore, the need to review journalistic writing on human rights agenda has been acutely felt in reality. However, some journalists point out the problem that most of them are not in the decision-making level from editorial point of view. Yet, they can take several initiatives as a good attempt. Equipped with rich information, they can also take preliminary decisions at their own level and can play a persuasive role in gaining editorial attention on vital human rights issues that need a frequent follow-up.

Some journalists still need to work hard to internalize the universal truth that the state and state actors are the guarantors of human rights. Mere constitutional and legal provisions Violations by individuals are considered crimes as per laws.  However, some journalists, due to their political prejudices, feel that human rights violations are committed not by the state actors but by certain political parties.

While the coverage of human rights issues is just superficial, mainly referring to incidents that some way becomes public, deliberate ignorance or even self-censorship is another difficult in developing a human rights approach to journalism.

A concern, not worth neglecting, raised by journalists themselves is the under-rating of journalists within media institutions. Journalists whose minimum ILO-specified rights have been violated in their institutions cannot be optimistic enough to advocate people’s human rights, though victimized journalists are doing their best human rights coverage.

Political protection of criminals in Nepal is a major problem that no journalist forgets to raise. However, mediapersons are the ones who create intellectual pressures against the criminalization of politics and the growing impunity.

Moreover, journalists agree that Nepal has innumerable human rights violations records. Serious human rights violations in the post-1990 period became a key factor for the initiation of Maoist armed insurgency in 1996. Therefore, journalists need to be more transformation-oriented and public-spirited to be good public reporters rather than spokespersons of the privileged community often tending to violate the human rights of the ordinary masses. Journalists, playing a proactive role, can enrich journalism through human rights perspectives, extremely relevant on a universal scale.

It is a matter of general understanding that human rights advocates must not deal with records and incidents only. They have to make efforts towards developing a level of thoroughness in their reporting and analysis. So should journalists.

In essence, journalists must not cover human rights only to satisfy political needs of the parties. Human rights need to be linked to the concept of applied democracy. The implementation of human rights amounts to the cultivation of democratic values. The agenda of political, socio-economic and cultural transformation, the cornerstones of Nepal’s current peace process, are inalienably concerned with the human rights approach to journalism.