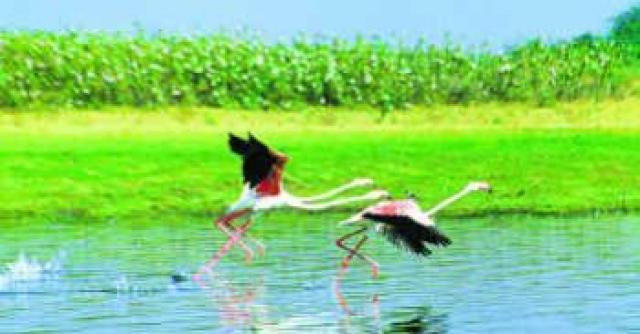 It was a sea of pink! Thousands of flamingos — those dainty, stork-like birds, with long legs, pink feathers and a distinctive crooked beak — were quietly sifting through the muddy waters of a creek in Mumbai. They were a strange sight, against the backdrop of the oil refineries on the far side. From a distance the flamingos appeared to be a mass of randomly moving pink dots, in sharp contrast to the muddy brown marshy land.

The atmosphere at the harbour was festive and the excitement of the people who had gathered was palpable. The Bombay Natural History Society (BNHS) had organised a "flamingo watch", to generate awareness about these beautiful creatures that visited Mumbai from their northern breeding grounds every winter.

Kids pushed and shoved each other to have a close look through the temporarily installed binoculars. Others excitedly searched Salim Ali’s field guide of Indian birds for more information about these birds. The volunteers tried hard to answer queries like, "Why are they eating all the time?"

Occasionally a fishing eagle hovered above, causing panic in the ranks below. A seagull plunged into the water right in front of us, disappeared under the surface, and came out with a fish. Nature carried on its usual routine, as it has been doing for eons, trying its best to adapt, adjust and reconcile itself. The sun neared the horizon and bathed everything in gold.

I started walking back, shaking my head in disbelief at the fact that a proposed sea link coming up here would go right through these marshes, forever destroying this valuable habitat. The flamingos seemed out of place here, their virgin beauty standing out against the plundered, savaged land. Would they move out from here forever? Or would nNature, again forced into a corner take this too in her stride, adapting, adjusting and surviving again in a losing battle?

The sun dipped below the horizon, its last feeble rays gone, plunging us into darkness.

Filed under: Lifestyle, World
Share Tweet Pin G Plus Email
previous article: Robots are steadily moving from the realm of fiction to fact.
next article: First pyramid in found in Europe-Great Find!