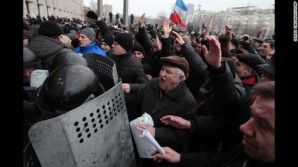 There is no clarity about the status of those Ukrainian citizens, who are living in Crimea at the time – they are not going to be naturalized and their basic rights could be easily violated.
The status of property Ukrainian government is unclear. There is risk of its nationalization.
Crimean customs checkpoints and frontier stations to be set up could cause additional losses for business and common people. All the deals signed before the referendum might be reconsider according to international standards.
The price for water and electricity provision would increase as it might be calculated according to international tariffs and regulations.

It is needless to say that the withdrawal of Autonomous Republic of Crimea from Ukraine is illegitimate. It can provoke a lot of threats, risks and economic difficulties. Given referendum is a criminal offence (art.110 of Criminal Code of Ukraine).