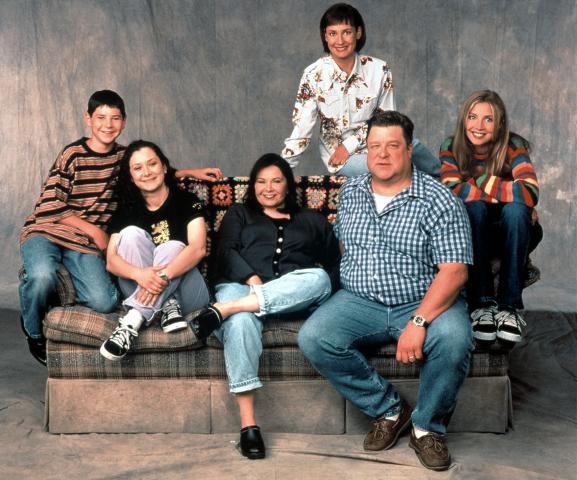 Over Twenty Years Ago, Yet the Parallels are Shocking!

Here we are, nearly a decade into the Twenty First Century and in the middle of one of the worst economic struggles that we have faced as a nation. Yet, with the current programming in our media, aside from the sensationalist “News” you’d never know it! We are constantly bombarded with the extravagances of our celebrities, Real Housewives, Teen CRIBS, and a slue of juvenile spoiled brats partying like it’s 1999. Well, there is one program on the boob tube these days that shatters this disgusting facade of endless material consumption. That program is Roseanne!

When Roseanne premiered on October 18, 1988, it did so exactly a year after the stock market collapse (Black Monday) of October, 1987. The Reagan Era was over and in the wake of 80s style hyper consumerism, rising like a phoenix, a grubby working class family captured America by storm! The Connors had the same issues we all had, the family business was failing, their children were anything but perfect, they were struggling to get by yet proud of their with hard work and bound by their unconditional love for each other. The parallels to our struggles today are astounding!

As the show progressed, so did the subject matter. They introduced several Gay characters, included themes on religious faith, abortion, drug use, teen pregnancy and sexual abuse. The Connors were a mirror to our society at the time and never pandered to the growing criticism that the show was merely a form of political rant and vanity project for Roseanne Barr to express her Liberal Sociopolitical views. The media who once gushed over the Connors were now criticizing them for being a big bummer and in1997, the show ended it’s ten year run.

Soon after, we saw a change in the American perception of Working Class people. Who cares about them? We’re all getting rich!! Eh? Bring on the Hiltons!

Well, the great big boom was soon to explode and in just a few years America would be faced again, with having to reckon its self with The Common Man. We, the Working Class schmucks, struggling to get by, in the middle of a seemingly endless war, who don’t have enough money for a “Super Sweet Sixteen”, or a brand new kitchen decked out with the latest stainless steel appliances and cherry cabinets, are sitting on our old grungy couches, eating store brand chips feeling more isolated than ever are getting angrier by the minute.

Even-though we are not being represented in the media currently, we still have a voice and it’s only a matter of time until this current culture of luxury obsession proves to be irrelevant.

So my friends! Treat yourselves to a good night of grungy TV and check out Roseanne. You will be faced with a mirror onto your life and just hopefully, comforted by knowing that you were not being ignored, at least not in 1988.