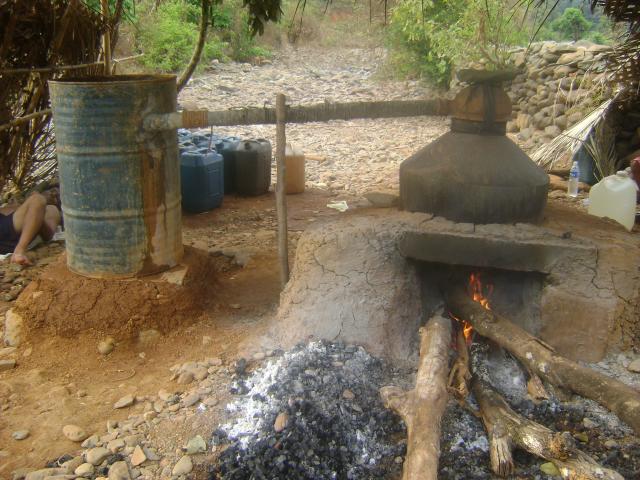 That it pours cats and dogs in India’s Goa, is a known fact. What you may not know is that for Goans, the best way to beat the monsoon blues is a secret in a bottle: Feni. Yes, a bottle of the locally brewed liquor, coupled a plate of spicy fish curry and rice is what keeps Goans going even when it pours on.

Yet Feni isn’t just a monsoon drink. It is the drink of all seasons, the spark of every fiesta, celebration and family gathering in Goa. Also, it is the only Indian alcoholic beverage so far, to receive a Geographical Indicator’ (GI) status.
Sadly, of late, all is not well with Feni.
Goa, a coastal state, is also a large producer of cashew- one of the main ingredients of Feni (palm and coconut being the other two). Now, it is said that every self respecting cashew planter in Goa has his own distillery and brews his own Feni. The making of Feni takes 3-4 days. Once the cashew fruit harvested, it’s juiced and buried in the earth and allowed to ferment into alcohol. This heady juice is later heated into vapour over a furnace fuelled by wood from the cashew trees themselves. The rising vapors are collected and cooled in a container. Essentially, this is the local variety of the Feni – home grown and earthy.
However, for Goans, there is more to Feni than that heady feeling. A hydroxide, the Feni is believed to be an excellent cure for stomach cramps and is also widely seen as an aphrodisiac.
The GI status was given to Feni in March 2009 – a move lauded by the makers of Feni and its patrons alike. It was expected that beside getting instant recognition across the world as a Goan drink, the GI status would also create large scale investment, thus ushering in a new era in Goan economy.
But, 2 years later, few of the expectations have been realized. And a big reason is the increasing shortage of skilled labour.
In the state, the skill of Feni making has been passed from generation to generation, thus making it a long-standing cultural and culinary tradition. Now, following the GI status, large distilleries have started making Feni. Employment in these distilleries have been attracting traditional brewers, thus creating a shortage of skilled labor in villages. As a result, local brewers – especially owners of small plantations are slowly being pushed out of Feni making business.
Says 65 –year old Sanjay Naik, a resident of Sankhlem village in north Goa and a Feni maker for past 35 years, “This year I could not even find laborers to pluck the cashew fruits. Those who were ready to work, were migrant laborers from Karnataka (neighboring state); they know nothing about cashew harvest. Engaging them in Feni making is nearly impossible.”
Naik also fears that with the entry of big players in the business, competition has increased and to stay put in the market, small distillers are going for cost cutting, thus compromising with the quality. For example, traditionally, Feni distillers use wooden vats. But now many are using steel and plastic vats, which is bound to affect its taste. Some are also complaining of rising price of fuel wood.
So, what is the way out of the decline?
“Most Goans now fear that soon they will have to stop brewing their own Feni and buy a branded one fromni from a liquor store. The GI status in itself can’t stop that from happening,” Naik says. “But if the government works out a plan to promote Feni by, lets say, giving subsidy on the raw materials like firewood, it will help,” he adds.
And what about the dearth of skilled labor?
Naik has a solution for that as well: villages can organize regular skill development camps where elders can teach the skills to young community members.”
Undoubtedly, that is an innovative suggestion. Now if only the state adopts it, the cheer for Feni can be louder than ever.
Filed under: Business, World
Share Tweet Pin G Plus Email
previous article: The Tunnel Vision of Ideology in the US
next article: Afghan forces involve in Attacking over Pakistani Security forces at Chitral