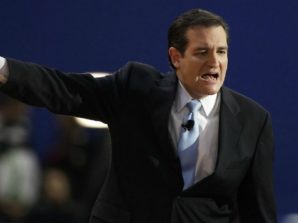 “Mr. President, I rise today to raise an issue that has been of growing concern to the American people: the exchange of the so-called Taliban five–five terrorist detainees from Guantanamo–in exchange for Sergeant Bowe Bergdahl”, said Senator Cruz.

On June 9, 2014 Senator Ted Cruz of Texas requested permission to address the United States Senate regarding the prisoner swap of the Taliban five for Sgt Bergdahl.

What follows is a unedited script of Senator Cruz’s speech:

“Mr. President, I rise today to raise an issue that has been of growing concern to the American people: the exchange of the so-called Taliban five–five terrorist detainees from Guantanamo–in exchange for Sergeant Bowe Bergdahl.

Let me say from the outset, this is not about Sergeant Bergdahl. The circumstances under which he became a prisoner of the Taliban is an issue for the Army. There was an investigation into this matter in 2010, and hopefully the Army will be able to bring clarity to that situation soon. What I wish to speak about today is keeping the American people safe from the terrorists who attacked us on September 11, 2001, resulting in the deaths of 2,977 innocent people.

The Taliban five are among the worst of the worst. They were all high-level officials in the Taliban regime who gave aid and support to Al Qaeda in Afghanistan in the period leading up to the 9/11 attacks. These five were designated “high” risk by the Guantanamo Review Task Force convened in 2009 on the orders of President Obama, whose report was published on January 22, 2010. Two of the five are wanted by the United Nations for war crimes against Afghan civilians.

Khairullah Khairkhwa, for example, was described in his GTMO case file as “a hard-liner in Taliban philosophy” with “close ties to Osama bin Laden.” Mohammad Fazl was second in command of the Taliban army in 2001. These were not junior-level players.

Capturing these five men was a priority when our troops participated in the liberation of Afghanistan from the Taliban in 2001, where our sons and daughters bled and died to free Afghanistan and to exact punishment on those who carried out a horrific terrorist attack on the United States of America. We cannot know for sure how many American soldiers paid the ultimate price to capture these five senior terrorists.

Even as many other detainees at GTMO have been released, up until now, these five have been considered too dangerous to let go. Given the level of threat they represent, any proposal to release them should be of the utmost seriousness. Unfortunately, by all indications the administration’s release treated their threat as anything but serious.

Americans need to know how the Obama administration thinks it has made our Nation safer by negotiating with terrorists to release these five dangerous terrorist leaders. Until President Obama can make his case and convince the American public that this swap was in our national interests, prudence dictates that all further transfers and releases from Guantanamo Bay should be off the table.

Unfortunately, there have been no answers from this administration on how this deal furthers the national security interests of the American people or why the deal was so urgent that the administration refused to comply with its legal obligation to inform Congress 30 days before the transfer. Instead, the administration has vilified those who would raise questions about it as somehow not being concerned about securing the return of our troops. That attack–that slur–shouldn’t even be dignified by a response, particularly given what has been publicly admitted.

President Obama has publicly admitted that there is “absolutely” a chance of the Taliban five returning to the battlefield and attacking Americans.

Indeed, the current Taliban leadership has announced that from their perspective this deal is so good for them that they should now prioritize kidnapping other Americans. For example, last Thursday one top Taliban commander told Time magazine–and this is a quote–“It’s better to kidnap one person like Bergdahl than kidnapping hundreds of useless people. It has encouraged our people. Now everybody will work hard to capture such an important bird.”

This deal puts every soldier, sailor, airman, and marine–every man and woman standing up to defend this Nation–in jeopardy.

The chair of the Senate Intelligence Committee, Senator Dianne Feinstein, has publicly said that she has seen “no evidence” that Sergeant Bergdahl was under urgent threat in recent weeks or months.

All of these admissions together raise serious and legitimate concerns about the circumstances of the release of the Taliban Five, and they also make clear that the administration should stop vilifying any who raise these national concerns. Instead, the President should stand up and honor his commitment to the American people, defend this decision in terms of the national security interests of the United States–what should be the highest priority for the Commander in Chief.

Instead, we have recently learned from news reports that there are at least four other Gitmo detainees who are being considered for release. So not only has there not been accountability as to why this happened, but it appears the administration wants to go down the same road and I can only assume is willing again to violate the law and not notify Congress the next time, just the way it violated the law by not notifying Congress this time.

Before any further such action is considered, we need to take a pause and assess what happened with the Taliban five. We need to answer:

Who did the vetting that resulted in the assessment that the Taliban five no longer posed a high level of threat to the United States?

Who participated in the decision to release them?

Was this the same deal the administration says they offered to brief Congress on previously or is it something different?

Was the President fully briefed on the background of the Taliban Five and the likelihood of recidivism?

How did the administration reach its apparently high level of confidence that the Taliban five will be secure in Qatar?

How did they arrive upon the notion that that security should last only 1 year, after which the American people will be safe if these terrorists are released altogether? On what basis did the administration judge that only 1 year was sufficient?

How was the decision made to ignore the law and bypass Congress, including bypassing the chairs of the Senate and House Intelligence Committees, Foreign Relations Committees, and Armed Services Committees?

In what circumstances does the administration intend once again to openly defy the law and refuse to provide notification to Congress?

These are questions, I might note, that should be bipartisan concerns. This should not be a partisan affair–asking questions that affect the national security of every single American citizen and every single man and woman serving in the military.

In order to give the Obama administration the opportunity to satisfy the many outstanding questions the American people have about their safety–and I would note, having just returned from Texas, I found over and over again Texans, men and women, asking these very questions–I will propose this week that before we consider any additional releases from Guantanamo, we answer these questions first.

The legislation I will be filing, No. 1, will immediately call for a 6-month freeze on any Federal Government funding to transfer detainees from Guantanamo. No. 2, to enforce this requirement, the legislation will provide that, should the President choose to disregard this law–as, sadly, has been his pattern so many other times–all funds expended in the transfer would be deducted directly from the budget of the Executive Office of the President. No. 3, because we understand that conditions might possibly arise that would necessitate the release of an individual prisoner and out of respect for the President’s special role in international matters, this legislation explicitly provides a means for the President to ask Congress for a waiver of the 6-month bar in an individual case. But, finally, because we believe the release of detainees from Guantanamo–which holds some of the most dangerous people on the planet–is a matter of the gravest import, this legislation would require that for every order for release of a Guantanamo detainee, it must be personally approved by the President. This would ensure that the fullest consideration and deliberation goes into the process.

First of all, how many Americans did these five terrorist leaders directly or indirectly murder? How many lives–American lives–are they responsible for taking?

Third, given their release–and the President’s admission that there is “absolutely” a chance that they will return to actively waging war against the United States–how many Americans are at risk of being killed directly or indirectly by these terrorist leaders we have just let go?

Every American is naturally eager to end the long war in Afghanistan, but that does not mean we disregard the threat that violent terrorist groups such as the Taliban pose to our Nation. We know from the hard experience of the last decade that at least one in three Guantanamo detainees has returned to the battlefield. That has been what history has taught us.

Until we have full confidence that this threat to American lives is being fully and properly assessed, that we are taking steps to protect the lives of American civilians and American soldiers and sailors and airmen and marines, it is only prudent to take the steps in the legislation I am introducing this week, and I hope the Senate will do so.

With that, I suggest the absence of a quorum”, said Cruz (source: Congressional Record http://thomas.loc.gov/).