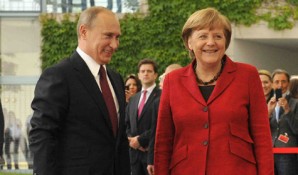 On 29April the US administration announced an initiation of the third round of economic sanctions against Russia. It’s anticipated they hit the major sectors of Russian economy after the most influential Russian top-managers and business owners have been banned from doing business in the U.S. It is also expected that the EU will join its Western ally in punishing Russia for building up a fire of the civil confrontation in Ukraine. But the EU is still hanged up for the final decision making endless rounds of internal negotiations. It seems that the driving force of such sluggishness is too close economic ties of Europe with Russia and especially with the largest European economy – Germany.
Really, in terms of mutual trade flows the U.S. feels itself much more comfortable in sanctions mode as its share in Russian external trade turnover was only 3 per cent in 2013 while the EU accounted for significant 49.4 per cent. The EU is also the dominating investor in Russian economy with massive 82 per cent share in total direct foreign investments to Russia for three quarters of 2013 comparing with tiny U.S. 1 per cent. Germany itself interlinked with Russians even more closely with the total trade turnover of $74.4 bn in 2013 and being the second largest investor in Russian economy with about $20 bn of direct investments made. Remarkably that Russia exports to Germany mainly hydrocarbons (oil, oil products, natural gas and coal) and secured about 36 per cent of total German oil supplies and 35 per cent of total gas supplies in 2013. Germany exports to Russia mostly high value added machinery products and equipment being the importer number one for Russia by its share in total imports.
If the third package of the sanctions will be enforced it is obviously that Europe and especially Germany would be hit much harder than the U.S. But the question is about the relative magnitude of this impact both on German and Russian economies. The general conclusion is that it will be painful for Germany but not so critical as it is depicted in some mass media that operate the absolute numbers. Let’s make some rough comparative analysis based on the numbers from trade statistics.
In terms of total exports and imports the share of Russian imports in Germany accounted for only 3.3 per cent from total imports in 2013while Russian share in total German exports was only 2.6 per cent. Russia was more dependent on Germany as its share in total Russian imports was 12 percents and 7.0 percents in total exports.
In terms of the largest goods traded Germany could easily switch supplies of machinery and equipment to Russia to other markets as they accounted for only 4 per cent in total exports of this group. For Russia it would be more difficult to find another markets for oil and gas as Germany took about 7 per cent from total Russian oil supplies to the world market and about 19% of gas supplies (in value terms).
Next, there would be some losses for German enterprises that supply goods to Russia or invested in setting up the Greenfield projects in the country. According to the Committee on Eastern European Economic Relations more than 300 thousand jobs in Germany are dependent on Russia that at the first glance looks as a big number. But keeping in mind that total number of jobs in Germany was 42.3 m in 2013 even complete disruption of business ties (which is not likely) would add only 0.7% to German unemployment that is definitely manageable by policy makers.
In terms of foreign direct investments (FDI), German investments in Russian economy in 2013 accounted for 1.6 percent only as a share of total FDI in Russia. Of course, loosing of the very prospective Russian market may be harmful from the point of view of an individual company like Volkswagen, Siemens or BASF that have been investing much in Russia over the recent years but it still can be compensated at the expense of another export markets (e.g. China). Even the sales of German cars to Russia which is the cornerstone of German exports to Russia are not so significant today as their share in total car sales worldwide was 3.2 per cent only in 2013. To the contrary, the loose of German investments would be essential for Russia that relies on German equipment and technologies in many sectors of economy.
Therefore, politics is driven by pragmatic economical thinking today in Germany and in the EU in general. In crisis times even few digits after dot in GDP growth could be a problem for European politicians hitting wide social expenditures in the EU. Germany plays a key role in the EU decision making and its ultimate vote will decide whether the EU will join the U.S. efforts to put Russia on its knees by means of economic sanctions or not. In any case Germany and Europe as well has all the possibilities to impose full-scale sectoral economic sanctions against Russia and how it is seen today from recent developments in Ukraine the possible losses of Europe would be easily overweighed by the ones from growing instability in the whole region.
Filed under: News, Politics
Share Tweet Pin G Plus Email
previous article: Is OST to PST Conversion Possible Manually or via a Third-Party SysTools OST Recovery Tool?
next article: Techtic Solutions Ventures Into “Webbing Wednesdays”