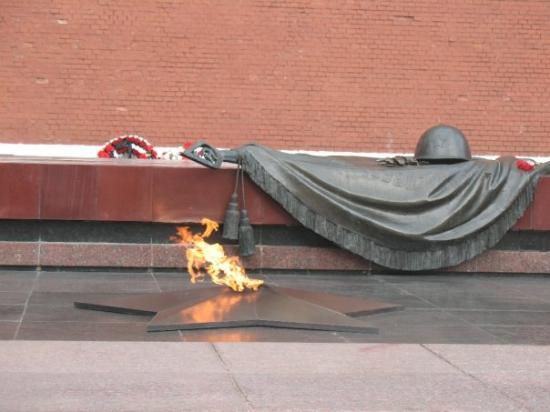 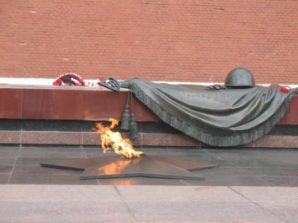 In front of the monument, there is a five-pointed star in a square field of labradorite, which emanates the Eternal Flame from its center. The flame illuminates a bronze inscription “Имя твоё неизвестно, подвиг твой бессмертен” , “Your name is unknown, your deed is immortal”).

On May 10, 2015 President Vladimir Putin made comments following a meeting with German Chancellor Angela Merkel that ended with a  solemn wreath laying ceremony at the Tomb of the Unknown Soldier in Russia near the Kremlin.

The Tomb of the Unknown Soldier (Могила Неизвестного Солдата) is a war memorial, dedicated to the Soviet soldiers killed during World War II. It is located at the Kremlin Wall in the Alexander Garden in Moscow.

The remains of the unknown soldiers killed in the Battle of Moscow in 1941 were initially buried in a mass grave at the 41st km of the Leningrad highway at the city of Zelenograd. This was the location of the closest approach of the German armies to Moscow during the war.  To commemorate the 25th anniversary of the battle, in December 1966 these remains were relocated to the Kremlin Wall.

Each year the site has over a million visitors, including dignitaries and leaders from around the world, as well as peace and anti war advocates from across Europe.

Today, Ms Merkel and I laid wreaths at the Tomb of the Unknown Soldier and honored the memory of the victims of the Great Patriotic War, which was such a tremendous tragedy for the entire world and for our nations. We stand in agreement in our assessment of these events and on the historical lessons to be learned.

Today’s joint ceremony reminds us of the difficult road that Russia and Germany traversed in the name of reconciliation. We went from bitter, hardened feelings to mutual understanding and cooperation. I am grateful to the Federal Chancellor for her sincere words of regret over the crimes that Nazi Germany committed against our citizens.

The Federal Chancellor and I held substantive talks and discussed a broad range of bilateral and international matters. It is no secret that Russian-German relations are not going through the best of times due to our differing positions on the events in Ukraine.

Our bilateral trade decreased by 6.5 percent in 2014 – the first drop in the last five years. The drop exceeded 35 percent in the first two months of this year. This situation is not in the interests of either Russia or Germany. In this respect, I must say that the business community in Germany itself would like to see the lifting of these artificial barriers to developing our mutually advantageous trade and economic ties.

Businesspeople are pragmatic by nature. They are therefore not leaving the Russian market and are assessing the current opportunities for doing successful business here. More than 6,000 German companies have a presence in the Russian market, and total accumulated German investment in the Russian economy comes to more than $21 billion. I remind you that around 100 German companies took part in just the single project of preparing the infrastructure for the Sochi Olympic Games. They had contracts worth a total of 1.5 billion euros and they performed the work and received the money as agreed.

There are other areas where the cooling in our bilateral relations has affected our business ties. But there are also areas that continue to develop. Interregional cooperation is one such area. For example, 23 Russian regions have solid ongoing contacts with 14 regions in Germany. A large conference of twin cities is scheduled to take place in Karlsruhe at the end of June, and around 100 pairs of twin cities are expected to attend.

We are developing our cooperation potential in the cultural and humanitarian sphere. We are now summing up the results of the reciprocal years of the Russian and German languages and literature, which took place in 2014–2015. Around 200 events were organized as part of this program, many of them focused on our two countries’ youth. This prompted the idea of organizing a year of youth exchanges in 2016. I think this is an important initiative with a focus on the future.

I want to remind you that our countries have succeeded in pursuing constructive cooperation in much tougher conditions and more difficult times than the situation today, times when it seemed that insurmountable ideological barriers divided us. There were plenty of positive examples of cooperation back then. I will not go through them now, I think that you are all familiar with them.

Naturally, our discussion of the international agenda focused primarily on the situation in Ukraine. Ms Merkel and I are in regular contact on this issue, including through our joint discussions with the Presidents of France and Ukraine in the Normandy format talks, which has shown itself to be quite an effective instrument for international facilitation of a peaceful settlement for the conflict in the Donbass region.

Yes, it is true that we differ considerably in our assessment of the events that led to the anti-constitutional coup in the Ukrainian capital in February 2014. But at the same time, I am sure that you will all agree, and the participants in the peace talks say this constantly, that there is no alternative to a peaceful diplomatic solution. To achieve this, we must fully and strictly abide by the Minsk agreements reached on February 12 this year. I remind you that peace settlement measures form a package that ties together all of the key aspects for a settlement: political, military, socioeconomic and humanitarian.

I think that we have every reason to say that the Minsk process is making progress, not without difficulties along the way, but it is moving forward. You know that after February 12, in spite of all the problems in southeastern Ukraine, the situation has been quieter there, even if there are still the problems that we know about. I firmly believe that the only way to guarantee a reliable and lasting settlement is to organize direct dialogue between Kiev, Donetsk and Lugansk.

I think this is one of the key conditions for a settlement in general. I also think it essential to lift the economic embargo, restore financial and banking ties, and carry out constitutional reform with the southeastern regions’ involvement. The Minsk Agreements of February 12 cover all of these areas, and as I said, they must be implemented.

We are happy that after the Normandy format consultations on April 30, when we had another telephone conversation, the four sub-groups set up to address specific areas of the settlement process began their work in Minsk on May 6. We will do everything possible to make their work effective, though success here depends above all on the people who have power, above all the authorities in Kiev.

We will exert all possible influence on the authorities in Donetsk and Lugansk in order to ensure that this process goes at the hoped-for speed and quality. Ms Merkel and I agreed to work more closely on the crisis in Ukraine, including through the Normandy format.

We also discussed our bilateral relations and spoke about the need to continue our talks on Ukraine’s association agreement with the European Union with respect to its impact on our economic interests. I want to inform you that a Russian delegation headed by the Economic Development Minister will go to Brussels on May 17–19.

Thank you for your attention.”