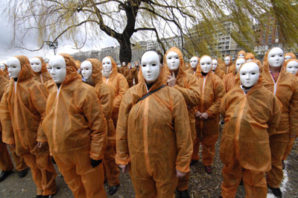 “I have read the executive summary and I also have been briefed on the entirety of this report”, says McCain. Pictured here protesters with Amnesty International demand investigation of CIA crimes and torture.

I commend Chairwoman Feinstein and her staff for their diligence in seeking a truthful accounting of policies I hope we will never resort to it  again. I thank them for persevering against persistent opposition from many members of the intelligence community, from officials in two administrations, and from some of our colleagues.

Filed under: News, World
Share Tweet Pin G Plus Email
previous article: “I believe the American people have a right–indeed a responsibility–to know what was done in their name”, argues McCain
next article: “There is no shortage of people who will cut your head off”, said Senator Graham