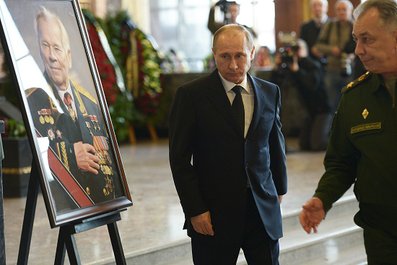 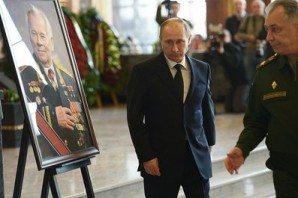 Vladimir Putin, President of Russia and commander of the Russian Armed Forces attend the funeral and remembrance ceremony of one Mikhail Kalashnikov, former Russian General and small arms designer in Moscow. Picture courtesy of the Kremlin Office of the President.

On December 23, 2013 Vladimir Putin expressed deep condolences to the family and friends of Mikhail Kalashnikov on his passing.

Mikhail Timofeyevich Kalashnikov (Russian: Михаи́л Тимофе́евич Кала́шников; 10 November 1919 – 23 December 2013) was a Russian general and small arms designer, most famous for developing the AK-47 assault rifle and its improvements, AKM and AK-74, as well as the PK machine gun.

The message reads, in part:

“This is an enormous irreparable loss for all of us.  Gone is a man of extraordinary talent and commitment, a figure of historical importance, a Russian original.  The weapon he created has served Russia reliably and will continue to do so for a long time to come, and it will forever remain a symbol of the Russian Army’s victorious traditions.

Mikhail Kalashnikov pursued his calling with single-minded dedication and commanded the most profound respect.  He gave liberally of his ideas and expertise to young specialists and was a tireless public activist.

We shall forever retain a fond memory of Mikhail Kalashnikov, a man who performed his duty to Russia with great integrity until the very end.”

The legendary small arms designer, a Hero of Russia, twice Hero of Socialist Labour, Lieutenant-General Mikhail Kalashnikov died on December 23 in Izhevsk at the age of 94.