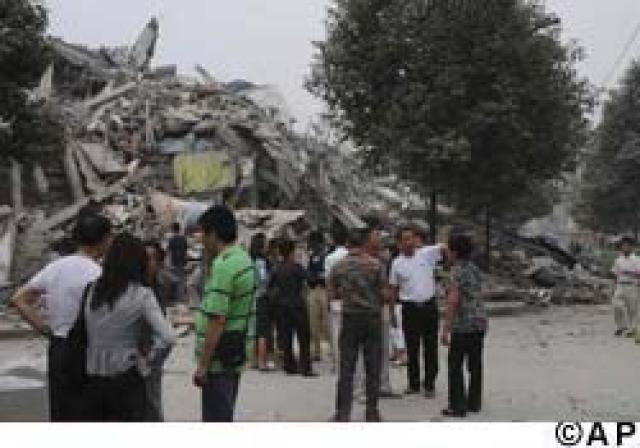 The death toll from the massive earthquake in southwest China’s Sichuan province has reached nearly 10,000, with hundreds still trapped under debris and rescuers struggling to reach more affected areas.

The Sichuan provincial seismological bureau said more than 1,180 tremors up to magnitude 6 on the Richter scale have been recorded as of 5am (local time) on Tuesay.

The toll figure climbed from more than 8,700 provided last night by local authorities.

And reacting on the crisis, the Chinese Premier Wen Jia Bao said, ”As far as I’m concerned the first thing is to save people. We can’t hesitate for one minute or a second or we could lose a child or a survivor”.

The government in Shifang, where a major chemical leak happened after the quake, said about 600 people died, including 81 students.

Government expected that as many as 2,300 people were still buried, including 920 students, official Xinhua news agency said. In another badly-hit city of Mianzhu, about 50 kms from the epicenter, more than 1,000 were reported dead and another 5,000 were buried till late last night, the local government said.

Dozens of military vehicles headed to Beichuan County, where officials said about 80 per cent of the buildings collapsed and up to 5,000 people were believed dead.

Rescuers scrambled to reach the disaster struck areas. Troops were approaching on foot to Wenchuan County, the epicenter of the quake.

The quake, with a magnitude of 7.8, struck close to densely-populated areas in Sichuan province, including the capital Chengdu, shortly before 2:30 pm (1200 IST) on Monday.

It is the worst to strike China since the Tangshan earthquake in 1976, which claimed 242,000 lives, Xinhua news agency said. Xinhua said 8,533 people had died in Sichuan alone, citing the local government.

Filed under: Lifestyle, World
Share Tweet Pin G Plus Email
previous article: Smile and the world will smile with you
next article: Tendulkar all set for IPL debut