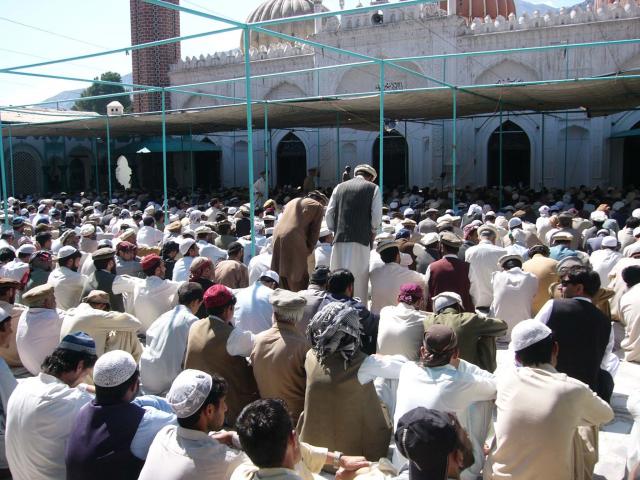 Thousands of faithful Muslims attended Jumatul Wida prayed for prosperity of the country.

CHITRAL: Thousands of Muslims (Faithful) attended final Friday prayer (Jumatul Wida) at Shahi Masjid (Mosque) where lawn of the mosque was full of prayers (Muslims) as well as outside park adjacent to Mosque. Addressing to Final Friday Sermon Khateeb Shahi Masjid Haji Khaleequz Zaman offered pray for prosperity and security of the motherland. He also appeals the Muslims to must pray for safety and prosperity of the country that is targeting by some insurgents and miscreants. He stressed upon the Muslims to play vital role in security of the country and ending the present tense scenario. He announced that they would be celebrating Eidul Fitar after announcing Central Crescent Committee. ( Ruiete Hilal Committee). A large number of Muslims attended final Friday prayer at Shahi Masjid and they also offered pray for prosperity of the country and eradicating tense situation from the country. meanwhile Khateeb Shahi Masjid announced and fixed rupees 43 per head as Fitrana. MNA from Chitral Shahzada Muhayuddin also attended Last Friday at Shahi Masjid who meet the people and listened their problems.