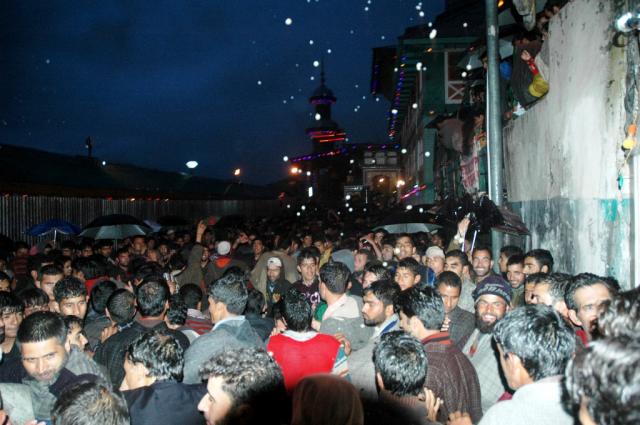 Jammu/Srinagar, April 07 (Scoop News) –From morning to midnight, on the occasion of Urs Sharief of Khawaja Zain-u-Din Wali (RA) at Aishmuqam, lakhs of devotees thronged on sacred and offered Fatiha inside sacred cave where Roza Sharief of Hazrat Khawaja Zain-u-Din Shah Wali Sahib is present.

The people from all parts of and Kishtwar had assembled in large number to pay obeisance to sufi saint who during his lifetime meditated and offered round the clock prayers at Aishmuqam. Even the King of the time was not given audience by the saint during his lifetime.

The Urs Sharief is marked with Zikre-e-Qadmain and Zikre-e-Charagan. The people of all the areas resort to illuminating wooden torches to remember the occasion when Hazrat Zain-u-Din Wali defeated forces of evil and darkness.

Earlier, during day time, Deputy Commissioner Anantnag Kifayat Rizvi personally monitored the arrangements of Urs Sharief. This year arrangements made by Auqaf by construction of Ablution places, bathrooms and other arrangements have also received appreciation. The endeavours of Vice Chairman Auqaf M. Y. Qadri and President of Intizamia  Khadim in developing the shrine sites www.scoopnews.in