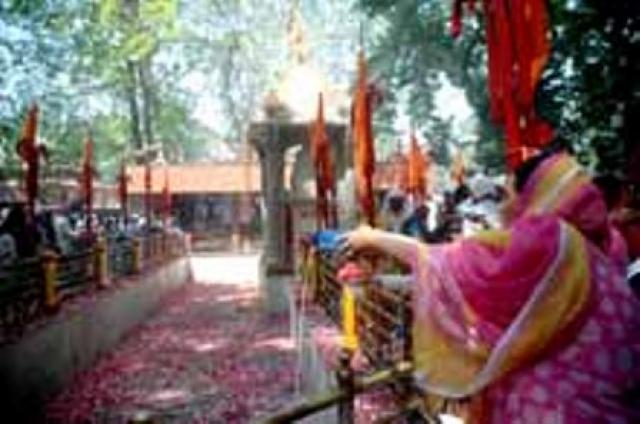 Kheer Bhawani(Tulmalla)/Srinagar, June 9 (Scoop News)  –  Keeping the faith alive thousands of devotees, today joined the annual festival with religious fervour on the occasion of Jaisht Ashtami at the Kheer Bhawani temple  in Tulmula.

The orginal Kheer Bhawani temple located in Tula Mula in Ghanderbal witnessed heavy rush  of devotees from across the country as large number of Kashmir pandits traveled to the revered shrine to pay their obeisance. The entire route from Ganderbal to the shrine wore a festive look as vehicles carrying the pilgrims in colourful dresses converged in long rows at the shrine.

Singing hymens and chanting slogans, thousands of Kashmiri Pandits today made it to this temple – Kheerbhawani – a fortified holy place where congregations are surging with each passing year.

For ensuring peaceful festival the government had made elaborate security arrangements.

Traveling all the way from Jammu and other parts of India where they are settled since their mass flight at the beginning of the last decade, the atmosphere in today’s congregation created nostalgia about the times when Pandits and Muslims lived side by side across the length and breadth in Kashmir .

The motives of making it to this place on this holy day of Hindu calendar were dual – attending an assembly consisting mainly of Kashmiri Pandits and praying for the safe return of the community to valley, the place of their origin. With tears in eyes and roses in hands as a symbol of love, these displaced Pandits folded their hands and prostrated before Maata Kheerbhawani with the motive of seeking her blessings.

Turning emotional while recalling how the day was celebrated during peaceful times, the reaction to question weather they want to return to was largely instantaneous. “Yes, we are borne hear and shall like to die here,” said Ashok Tikoo, a Bank employee who now lives in  .

Sensing a change in situation, some of them remarked, “Peace is returning to our homeland.” "We want to return but we don’t want security from police or army. We want security and assurance from our Muslim brethren," said Shamboo Nath, when asked by this reporter about his wishes.

Pointing out towards Muslim boys selling rose petals and earthen lamps, Shaboo remarked, “These are my security. There is no change in the attitude of the Muslims. I know, they want us back.”

Sarojni Raina (Malla) from , who orginally hails Anantnag said, "I love my and want to return here but if atmosphere becomes favorable," She  said he visits the holy place second time. She said my wish is to see my inlawas house at Bijbehara which I have not seen yet after my marriage.

Sarojni praised the hospitality exhibited by majority Muslim community during the festival, each year. "We’re thankful for the support and friendly gestures of our Muslim brothers," she said.She wished, "May this be like what it was before,"

Another devotee Brij Mohani Koul a PDD employee said the growing number of pilgrims every year is a welcome sign of even better days to come.She  said the festival at Kheer Bhawani offers an opportunity for everyone to come back and rediscover their roots.  “we  pray for absolute peace in our prayers,Brij Mohani said..

Shiban Wali who visited the holy place along with his family, expressed happiness over the hospitality shown by Kashmiri Muslim said: "It is really wonderful being here. I’m happy that Muslims and Hindus are together at a holy place."

It was an unusual event in the area, which is celebrated with the participation of many local residents providing essentials to the pilgrims. “The locals belonging to the majority community have been giving us all support and assistance for the smooth conduct of the annual pilgrimage”, said a Sunil Bhat of Barsoo, Ganderbal and presently living in .

The scenes at the entry to the shrine were “reminiscent of the good old days”, according to Abdul Rashid, selling milk to the pilgrims outside the main gate of the shrine. The annual festival is held here on ‘Jeshth Ashtmi’ when pilgrims seek the blessings of the deity.