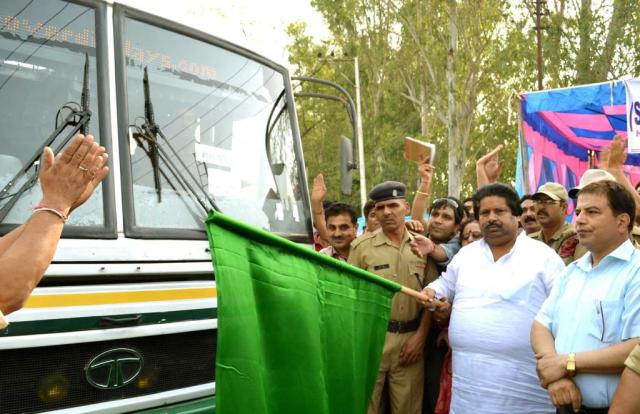 Jammu,May 28, (Scoop News) -Minister for Revenue, Relief and Rehabilitation  Raman Bhalla said that Government has made all necessary arrangements for the transportation and comfortable stay of devotees who left for Tulmul to attend the traditional Kheerbhwani Mela starting on May 29.

The Minister flagged off sixty five buses with over four thousand pilgrims from and rest of the country.

Relief Commissioner (M)  Ravinder Kumar Pandita besides other senior officers of civil and police administration were present on the occasion.

The Minister said that the devotees, majority of whom are Kashmiri Pandits, have come all the way from various parts of the country to attended the Mela at the highly revered Shrine of Mata Kheerbawani in Valley.

“The Government has made arrangements for the stay of the pilgrims in schools and houses of local people, who have voluntarily offered their cooperation for the visiting devotees as a good will gesture”, the Minister asserted.

The Minister said that about five lakh devotees are expected to pay obeisance at the revered shrine in Tulmul area of this year.