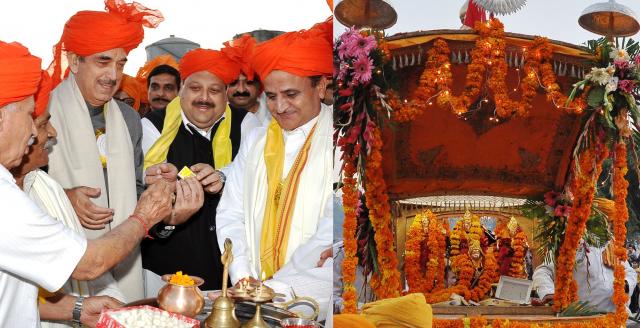 Jammu, October 24(Scoop News)- Dussehra festival  was  celebrated  with religious fervour and gaiety  in with  thousands of people  watching the  burning of effigies of Ravana, and his brothers Kumbhkarna and Meghnath to mark the culmination of good triumphing over evil, here today at Mini Stadium Parade Ground.

Earlier, the devotees along with the ministers performed the Rath Pooja symbolising the return of Lord Rama after defeating the demon king Ravana.

Speaking on the occasion, Union Minister Ghulam Nabi Azad highlighted the significance of the day as the triumph of good over evil, adding that the time tested principles were the very spirit of great Indian civilization which has survived many ups and downs over thousands years of its existence.

Speaking on the occasion, Deputy Chief Minister, Tara Chand described the occasion as inspiration for following the truthful path for fighting against the evil forces. He said it were these principles enshrined in the religious scriptures which   had given strength to the people of against all the evils.