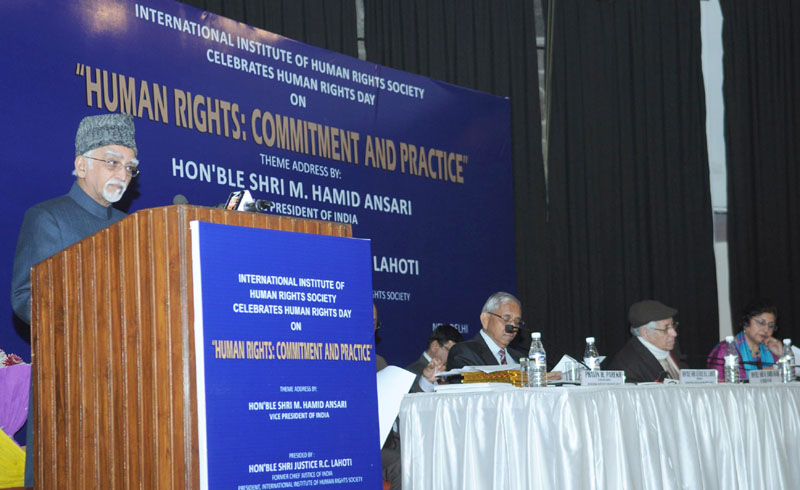 New Delhi (PIB-GR-TYP-BIN): The Vice President of India, Mr. Mohd. Hamid Ansari said that natural resources conflict, issue of gender equality, caste, communal, ethnic and sub-national conflicts, environmental implications over developmental projects have become part of Human Rights agenda. He was speaking at the International Human Rights Day function, on December10, organized by the International Institute of Human Rights Society (IIHRS) which was attended by Justice R.C. Lahoti, President of IIHRS, Justice Soli Sorabjee, Vice President of IIHRS and other dignitaries. He said that the human rights abuses by non-state actors, such as violent insurgent groups, terrorists and extremists, both from the left and right, has also emerged as a major challenge.

The Vice President said that International Human Rights Day is remembered by all who care about humanity and wish to propel it away from brutality and towards humaneness in greater measure. He highlighted three characteristics of these rights: (a) they are ‘natural’ and accrue to us by the virtue of being humans (b) they are ‘universal’ and pertain to all human beings irrespective of nationality, place of residence, sex, national or ethnic origin, colour, religion, language, or any other status, and (c) they are inalienable and cannot be taken away except in specific situations and according to due process.

The Vice President said that over the past two decades a consensus has emerged that with respect to human rights, states have a threefold responsibility: to respect, to protect, and to fulfill their obligations, but added that the extent to which principles and international mechanisms based on Human Rights can and do go, as also the question of their universal applicability without exceptions, is the subject of vigorous debate and much controversy on international forums.

The Vice President said that the framers of our Constitution were aware of the Universal Declaration of Human Rights. The Fundamental Rights enshrined in the Constitution cover most of the rights that had been articulated in the Universal Declaration, but there is at times a gap between what the official agencies project and what is perceived to be the situation on the ground. One reason for this is wider public awareness of human rights norms; another is the extent and speed with which defaults or alleged violations are brought to public notice, he added.

The Vice President opined that in a vibrant and robust democracy like ours, there is no shame in acknowledging the faults and the lacunae that exist in the policies and institutions pertaining to human rights. He added that our point of reference should be the Constitution of India and the principles, rights and duties enunciated therein.

Filed under: Civil Rights, News
Share Tweet Pin G Plus Email
previous article: A Dignified Human Life Is The Core Aspiration Of Every Human Being: Kiren Rijiju
next article: ‘Eternal Vigilance Is The Price Of Liberty’