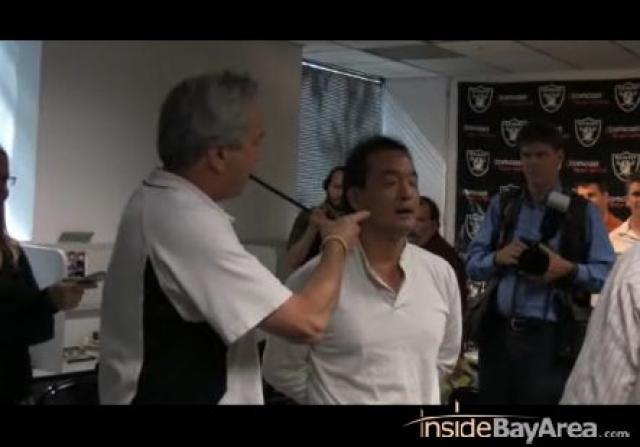 After an Oakland Raiders press conference on Monday, Tim Kawakami, the Mercury News football beat reporter, and John Herrera, a Raiders Senior Executive, got into an argument about Kawakami’s column.

John Herrera accused Tim Kawakami of basing his recent article about the planned firing of head coach Lane Kiffin on lies. Cameras were still rolling from a news conference regarding Kiffin when Kawakami and Herrera confronted each other in the conference seating area.

Herrera said, "You built a whole column on a lie! So did Lowell Cohn. So did your pot-smoking buddy Mike Silver." Kawakami responded by saying, "you’re embarrassing yourself," to which Herrera replied, "I don’t care!"

At one point, Tim Kawakami asks Herrera "you want to punch me?" "I’d love to," Herrera says.

It was a heated exchange although no blows were thrown. As Tim Kawakami puts it, it was just another crazy day in Raider Nation. See the video below.