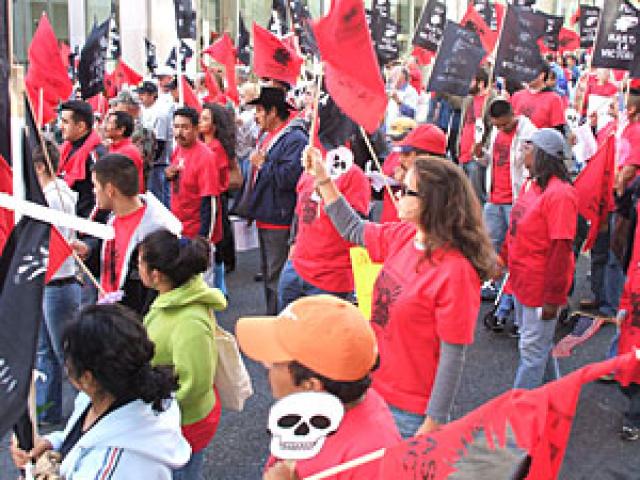 Hundreds of members of the Farm Labor Organizing Committee (FLOC), religious leaders and community and union supporters from across the nation traveled to Winston-Salem, N.C., where they rallied today outside the Reynolds American Inc. (RAI) shareholders’ meeting.

Carrying displays of mock tobacco leaves and placards depicting life in the tobacco fields, the marchers demanded that RAI CEO Susan Ivey meet with workers to discuss the unsafe and harsh work conditions, something Ivey has refused to do for more than a year. Reynolds American is the parent of R.J. Reynolds Tobacco Co.

Inside at the shareholder meeting, supporters of the workers plan to introduce a resolution calling on RAI to create and support labor standards for farm workers. The Rev. Michael Crosby, corporate responsibility representative of the Midwest Capuchins Franciscans, who sponsored the resolution, says:

It is critical to have some resolution appeal for the effort of farm workers to have their basic human rights realized—rights which are taken for granted by almost all other workers in mainstream society.

As a dominant player in the big tobacco game, RAI wields significant industry clout and can improve working conditions in the fields—but has not developed the political will to bring about change. Instead, tobacco’s big player continues to make billions of dollars every year, while farm workers live in dire poverty, facing subminimum wages and extremely dangerous working conditions.

In fact, conditions for farm workers who harvest tobacco are far more dangerous than many realize.

Speaking to a FLOC rally last year, James Andrews, president of the North Carolina State AFL-CIO, summed up the workers’ plight this way:

Each year thousands of workers are effected by green tobacco sickness, caused by an overexposure to harmful chemicals found in tobacco leaves. Many of these workers receive little or no medical attention. The vast majority of North Carolina farm workers are not covered under workers’ compensation insurance.

The fact that farm workers still live in extreme poverty and are vulnerable to many work-related illnesses is not only a tragedy but a moral disgrace hidden from the eyes of most Americans. FLOC will campaign until Reynolds Tobacco commits to joining us in addressing this national shame.