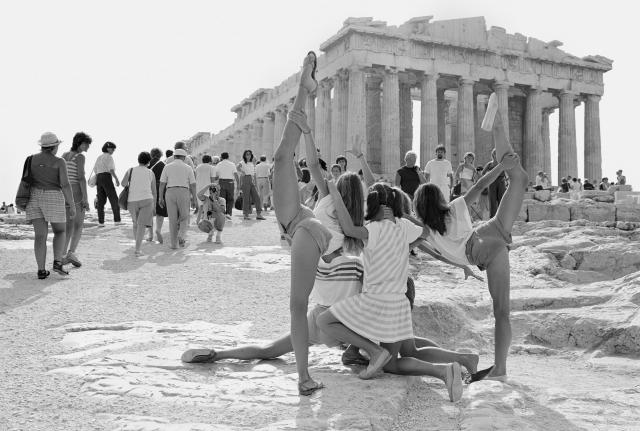 Tod Papageorge’s photographic eye is as fierce as his reputation as the head of Yale University’s graduate photography department. Regarded as the bridge between Henri Cartier Bresson’s school of the ‘decisive moment’ and the American school of photographic realism exemplifed by street photographers Gary Winnograd and Diane Arbus, his highly-anticipated exhibition at the Xippas Gallery, featuring photographs taken at New York’s Central Park and Athen’s Acropolis, inaugurates the Athens Photo Festival this year.

A self-confessed ‘mongrel’, Irish-Greek-American photographer Tod Papageorge’s “genetic material comes directly from two great artistic cultures.” With origins in Kalamata, he describes himself as “one of those visitors who contemporary Greeks, particularly skeptical Athenians, probably have a special word for: the holy fool in dumbstruck awe of the ancient ghosts of this civilization, and the immeasurable, incomparable works they created.” That same dumbstruck fool has captured some of the most dynamic images of the Acropolis, taken during the summers of 1983 and 1984. “It was a bit of a strange project to undertake: to walk up to the Acropolis every day for one month, and under the brilliant sun take pictures within the confines of a bare, marble yard, where two of the three great buildings were covered in scaffolding. Occasionally, though, a small, almost-miraculous, event would occur, such as the picture of the dancers performing an arabesque.”

There is an undeniable gravitas about Papageorge. A master at capturing time in his photographs, he has a degree in English Literature and his attraction to photography was that it felt closer to writing and literature than any other visual art. “Occasionally, something in the world "reads" to me almost as literally as a writer’s image, which was the case with the picture of the young man” reading on the capital of a marble column. By simultaneously reflecting the past and the present, the image expresses a sensitivity and a fluid narrative that permeates his work. He explains, “As Goethe had it, “we see only what we look for, and look for what we know.” The thing that I know to look for is typically unconscious, intuitive, and elusive, often nothing more than a fleeting conjunction or rhythm of forms. The young man in that picture may not invoke Hermes, or his twentieth-century brother to you or anyone else, but he did to me.”

A staunch advocate of black and white film, not even the celebrated light of Greece could persuade him otherwise. “There’s a significant difference between light and color. To my eye, most color photography is not quite up to effectively dealing with the actual, physical subtleties of light. The camera I was using in Athens was selected precisely to describe as gloriously as possible the irradiating light I found in Greece. These pictures are all about the light and can be fully appreciated when seen as actual prints on the gallery wall. A lot of time and effort went into producing the prints and at the core of that effort was the attempt to evoke as accurately as possible the specific beauty of the Attic light.” This respect for both the medium and subject is evident in his exhibition at the Xippas gallery. “All of the pictures in the show interest me in different ways. One of those ways being how they might add up as an ensemble of pictures to perhaps suggest how powerful a creative medium photography can be, like a vessel able to contain something of the variety of meanings and voices that poetry can. That’s my hope, anyway.” We all know what a wonderful thing hope can be.