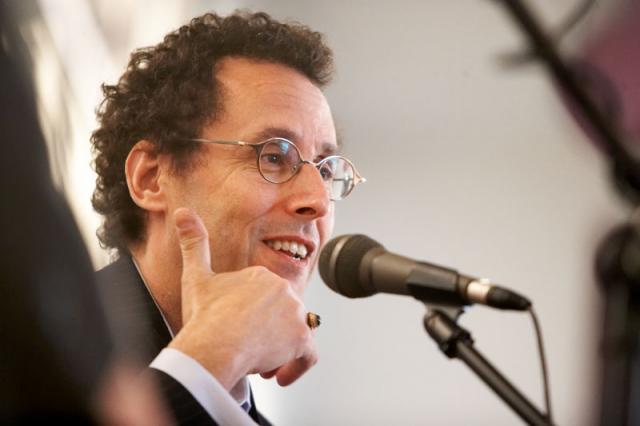 I saw Tony Kushner at Temple Emanuel in Kingston, New York, on November 18. He was interviewed by the playwright Rinne Groff.

Kushner worships Lincoln, almost literally. Nonetheless, he consistently refused to write the Lincoln screenplay for Steven Spielberg, for years. "There are two types of characters I can’t write," he explained, "a psychotic and a genius. Because a psychotic has no center to his personality, and a genius has a center we can’t imagine." He continued: "Someone like Michelangelo…", — then remembered he was in a synagogue. "It’s a shonda to say, ‘Michelangelo,’ in a synagogue," he observed, half to himself. Then he started again: "Someone like Einstein…" [Note: Shonda means "shame" in Yiddish, but has the connotation of a public embarrassment.]

What made Tony change his mind about the screenplay? Spielberg gathered all the greatest experts on Lincoln in an auditorium on Central Park South, and invited Kushner. "I’d been to academic symposiums before, and usually the speaker cuts off the head of his opponent, then displays it so everyone else can see how hollow it is," Kushner recounted, "but these people were different. They spoke very respectfully to one another, even when they disagreed. Afterwards, I asked Doris Kearns Goodwin why that was, and she said: ‘It’s who we study.’"

Kushner began to read obsessively about Lincoln. "Almost everyone who knew him says the same thing," he reported, "that he was very warm and kind, but also cold and removed. Lincoln was a weird guy." Tony told the anecdote about Lincoln traveling to Richmond just a few days after the Confederate capital felt. "He rode in a boat past Confederate forts that may not have realized the war was over, then he transferred to a smaller boat to reach Richmond. He walked through the city, and anyone could’ve shot him. But the strangest thing was that he took Tad, his 12 year old son, with him. When he transferred to the smaller boat, the captain said: ‘I can’t take this child; it’s dangerous,’ and Lincoln replied, ‘If I didn’t take him, he would never forgive me.’"

Tony realized he could write the warmhearted side of Lincoln, but not the godlike side — that would require the perfect actor. Luckily, that actor arrived, after also turning down Spielberg several times (Daniel Day-Lewis). Kushner has spent the last six years of his life working on this film — which at times seemed like a no-go. Now he finds himself speaking incessantly about the 16th President. "I tell my friends I have ‘Lincoln logorrhea,’" he admitted, to enormous laughter. (The next day I realized this was a clever pun on "Lincoln Logs," the toy which allows any child to build a miniature log cabin. Kushner, I forgot to say, is funny.)

Afterwards, I followed Tony into the reception room, to ask a question. I was the last person to speak to him, as he autographed children’s books for his agent [Brundibar, illustrated by Maurice Sendak]. "What’s your name?" Tony asked, looking into my eyes.

"Is that your whole name? Or is there more?" he asked.

"No, just Sparrow," I explained.

"Except Cher has a last name," I pointed out.

[Confession: I didn’t take notes or use a tape recorder. All these quotes are from my peerless memory.]