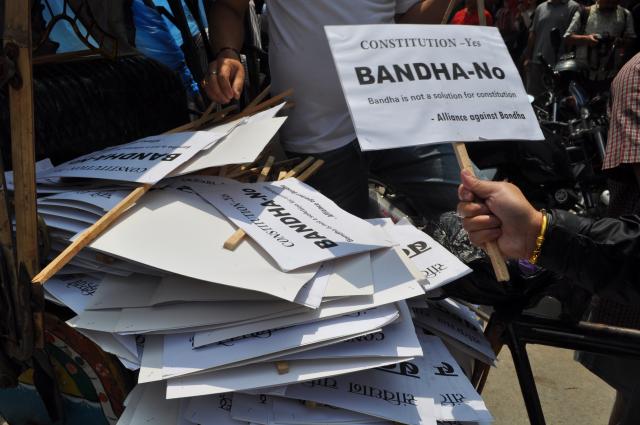 Kathmandu May 13, 2011: The Tourism Alliance compromising entrepreneurs and associations related to the field today stepped up to protest and defied the shutdown or bandha program here in Kathmandu. They also organized a motorcycle rally with the theme “ Bandha is not a solution for constitution” in protest against the shut down program in and around the city area. From the past few years due to political instability and lack of good governance the political parties have been frequently organizing blockade and shut down program for their agitation on regular basis where the people have been directly affected and at times people have been protesting against it.

Recently during the launch of   “The Nepal Tourism Year 2011” campaign all the political parties had pledged to show their solidarity towards the campaign and had formally announced that they would not organize any sorts of blockade or shutdown program that will affect the tourism industry. But soon after their pledge, one after the other the shutdown programs started happening and now the indigenous group in constants suppression of the delay in declaration of constitution organized a shutdown program here today in kathmandu where the Tourism Alliance opposed the shutdown and organized this protest program.
According to the organizers, “After launching the Nepal tourism years 2011 campaign the country is spending so much of money and resources in bringing the tourist in this country where as the political parties and their affiliated organizations are constantly hampering  the business by such intrusions. We the tourism industry and all the related organization have organized this rally to opposed such acts of shut downs. The Tourism industry has hugely been affected suffered the consequences of bandhas and shutdown and we don’t want to bear any more cost, that is the reason why we have come out and stepped up. No matter for what reason the political parties have organized the shutdown program it’s illogical and unpractical.”
Filed under: Opinion, World
Share Tweet Pin G Plus Email
previous article: 100 died in two separate suicide attacks
next article: Double standards of JK govt on rehabilitation policy