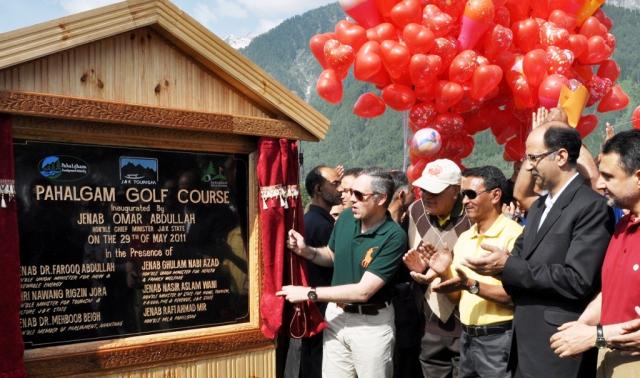 Srinagar/Phalgam, May 29 (Scoop News) –     Chief Minister Omar Abdullah Sunday flagged peace as necessary ingredient in economic betterment and welfare of the State calling for maintaining tranquility and conducive atmosphere to restore the pristine tourism glory of Jammu and Kashmir.

Inaugurating 18-hole golf course of international standard at world famous health resort of Pahalgam this morning, the Chief Minister expressed the hope that with the development of conventional tourism, the sports and adventure tourism would receive due attention to grow and attract tourist from all across the world having interest in these fields.

“Ours is the land of natural beauty and cultural diversity embedding rich heritage with holy places of pilgrimage and rear bio-diversity”, he said adding that its preservation and showcasing at global level requires considerable imputes from the concerned departments.

Omar said that tourism from the times of ‘Mughals’ and centuries earlier, used to be an important factor in economy growth and development of Jammu and Kashmir. “Every one of us has to contribute in maintaining and developing tourism in the State to give necessary fillip to the development and prosperity of the State”, he said highlighting the importance of tourism in creating wide ranging job opportunities and economic activities in the State.

The Chief Minister said that the world class golf course at the Pahalgam and number of other golf courses in the Valley and could be marketed internationally for the golfers to play tournaments in the beautiful part of the world. He said a golf course at Sidhra Jammu has been inaugurated recently while the golf course at Gulmarg is expected within next couple of months to further expand the golf arena in the State.

Omar Abdullah suggested the name of ‘ledder valley golf course’ for Pahalgam golf track describing its fineness, world class standard and uniqueness depicting the natural grandeur of ledder valley. He said golfers visiting here could at one hand enjoy playing at the one of the best golf courses in the world and on the other relish the natural beauty of the area.

Speaking on the occasion, the Union Minister for New and Renewal Energy, Dr Farooq Abdullah emphasized the importance of maintaining golf courses scientifically and professionally.

“We have world class golf courses in the State”, he said asking for proper watch and ward of the grounds and maintenance of the courses in a befitting manner. He appreciated the State Government for concentrating on revival of tourism in the State and taking new initiatives to promote adventure, sports and pilgrim tourism in .

Dr Farooq said that tourism has a position of backbone in the economic development and welfare of the State. “Almost every one of us is directly or indirectly related to the tourism development, as such, we have to be equal partners in the development and growth of this economically vital sector”, he added.

The Minister for Tourism, Nawang Rigzin Jora and Minister of State for Tourism, Nasir Aslam Wani in their speeches on the occasion narrated the measures underway for the promotion and upgradation of tourist infrastructure in the State.

The Ministers also presented resume of the steps in place to boost up non-conventional tourism in the State. They referred to the development of new golf courses and upgradation of existing ones adding that sports tourism is being given necessary thrust to rope in sports lovers from all over the world.

The Pahalgam golf course is spirit over an area of 1113 kanals of land and the length of 18-hole course is over 700 yards. It has been completed at a cost of about Rs 29 crores while another Rs 8 crores are likely to be spent on it for further expansion and infrastructure development.

The Chief Minister and Union Minister for New and Renewal Energy also tee off the golf tournament after inauguration of the venue.