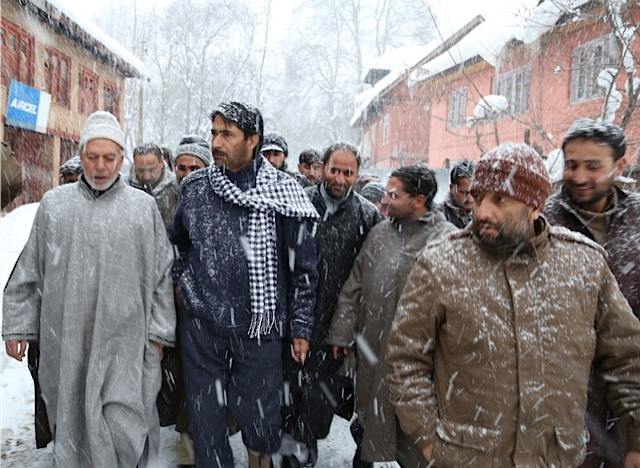 Anantnag,January 06, (Scoop News)-Minister for Tourism, Ghulam Ahmad Mir today conducted an extensive tour of Kapran area and took stock of the damages caused to the public utilities due to recent heavy snow fall.
The Tourism Minister, who is also MLA of the area, accompanied by a team of officers, assessed the losses to the property and public utilities in several villages and hamlets. He directed the concerned authorities to ensure early restoration of power and drinking water supply besides immediate clearance of snow on the link roads for convenience of the people of the area.
During the tour, the Minister also took stock of the preparedness of the administration in case of further snowing in the area and asked the concerned authorities to be vigilant and pro-active to meet any eventuality. He said people in the snowbound areas have high expectations with the state government adding that no stone should be left unturned to restore road connectivity, electricity and drinking water supply in the affected areas on war-footing. He asked the officers and engineers to ensure quick response in their respective jurisdiction in this hour of need. He said there should be no laxity in this regard
The Minister ascertained measures taken by the concerned district administrations for restoring public services in snow affected areas and mitigating their difficulties.
The Minister called upon the concerned District officers to ensure punctuality of their subordinate staff in their respective areas for convenience of the people adding that functioning of essential services especially healthcare, drinking water, and power supply facilities should not be affected in remote and hilly areas at any cost.
The Minister, during the tour, also took stock of the supply of essential commodities and directed CA&PD to ensure supply and distribution of ration to the consumers in time. He asked the concerned Deputy Commissioner to intensify the services of market checking squads to check black marketing and hoarding.
Meanwhile, the Minister also reviewed supply and stock position of essential commodities at an officers meeting at District head quarter Anantnag. He directed concerned to frequently visit remote and hilly areas and assess the people’s problems and developmental needs for immediate redressal, especially during winter.