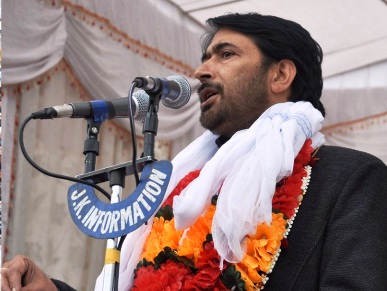 Surat, (Gujarat) August 23(Scoop News)- Minister for Tourism, Ghulam Ahmad Mir has appealed all the countries to allow their citizens to visit Jammu and Kashmir adding that J&K is as safe as other parts of the World.
This appeal was made by the Tourism Minister in his address after inaugurating Travel and Tourism Fair (TTF) here on Friday. He said TTF is country’s leading exhibition for the travel and tourism industry. He said such events provide opportunities for organizations from India and aboard to showcase their products and services to a large and cross-sections of the travel trade industry and consumers across major markets in India.
With over 140 exhibitors from 19 Indian States and 4 Countries under one roof, reinforcing it as an important annual destination promotion and networking platform for the south Gujarat market.The Jammu and Kashmir Government have also setup its stalls showcasing distinct tourism potential of all the 3 regions of the State. A number of Tour and travel operators, besides both the Tourism Directors of Kashmir and Jammu Divisions and other senior officers of Tourism Department attended the TTF.
Tourism Minister said unfortunately, Jammu and Kashmir has passed through hard times during past, but the resilience of the people of Kashmir have helped the tourism picking up in the State since last 3 consecutive years”. He informed about the diversity of terrain and culture which is experienced by a tourist while he plans holiday options in Kashmir and ladakh. “All three regions of Kashmir, Ladakh and Jammu offer diverse forms of tourism where we provide all kinds of tourism products in this zone of our country”, he said and added that Kashmir has the distinction of having four distinct seasons and each complimenting the other.
Tourism Minister said that Kashmir known as paradise on earth is best suit for tourists to enjoy their holidays. “Our State is round the year destination due to its varied topography and abundant natural beauty with lush green spots and rich environment and peculiar world famous water bodies like, Dal Lake, Wullar Lakes, Manasbal Lakes, Mansar, Surinsar Lakes. We have created several tourist attractions in all the regions with focus on highlighting adventure, golf, health, pilgrim and convention tourism besides leisure and thrown open virgin tourism spots like Yousmarg, Doodpathari, Baderwah , Gurez, Padder, historic Mughal road spots and Bangus”, J&K Tourism Minister said.
Minister described Jammu as city of temples and the region is famous for pilgrim tourism where millions of people visit for paying obeisance to revered Shri Mata Vaishno Devi and Shiv Khodi shrines round the year. The region has also lot of potential for adventure tourism like paragliding, Rafting and Mountaineering. It is blessed with huge attractive lakes and beautiful collection of various species of migratory birds.
Minister told the gathering that, Tourism means the principle of travelling for pleasure and it has come a long way in our state. “Tourism promotion activity is not only to earn revenue, but more than that it has been a challenge to promote J&K as a safe destination for the tourists from world over“, he asserted.
Minister assured them all that Kashmir is as safe as any other parts of the World. We know that Tourism is one of the major binding forces for spreading friendship and uniting souls. All of us have to act as Tourism ambassadors and try our best to unite those parts of the world which are still less connected.

Filed under: News, World
Share Tweet Pin G Plus Email
previous article: The United States remains fixed on its policy towards Kashmir
next article: Cyber Campaign has started against Modi.