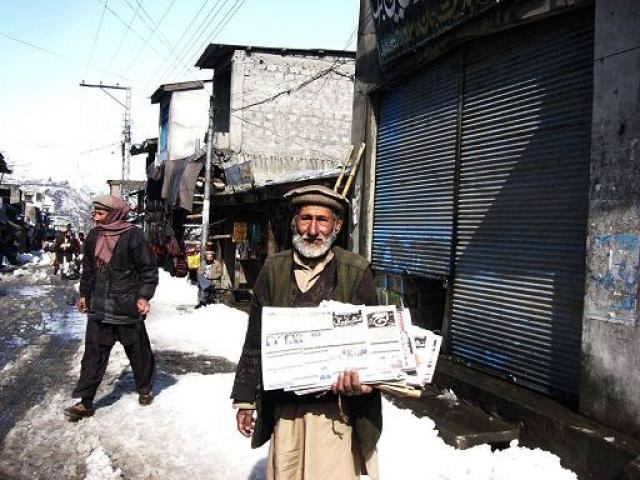 CHITRAL: To record their protest against Water and Power development Authority (Wapda) and Peshawar Electricity Supply company (Pesco) shopkeepers observed complete shutter down strike on the call of trade union Chitral, which would be, continue for 3 days. All markets remained closed on Friday. Addressing to the protesters gathering (shopkeepers and general public) Habib Hussain Mughal President Trade Union Chitral and other office bearers said that supply of electricity has been suspended for the last 15 days but no action was taken for its restoration. He said that the local hydropower house has been constructed in 1975, which is out of date, and its two Units (generator) damaged due to overload and out of order which not working as a result the whole territory of town area plunged into dark due to longest break down. They said that Chitral having potential of 4500 megawatt due to plentiful water resources but no government thought sincerely for utilization of this natural resource to establish hydropower house and fulfill need of power shortage.  They lamented elected representatives of Chitral who badly failed solving power shortage problems. They said that there are plentiful water resources at Chitral and the whole Chitral required only 17 Megawatt electricity. If micro hydropower houses were established on River bank at different places of Chitral  this issue would be settled for ever but the politician would be frustrated because they running their politics only on electricity after completing of Lawari tunnel as they politicizing this issue unnecessarily. They demanded for installing new machineries and latest generator (units) at local powerhouse for augmentation and up-gradation its power capacity from one megawatt to 6 megawatt. The traders wearing black ribbon on their arms chanted slogan against Wapda who badly failed in restoration of power despite spending of 15 days.

They said that traders facing great loss due to non-availability of electricity and continue suspension of power. Especially business of Photostats machines, and mini factory owners badly affected by longest break down at Chitral.
They demanded for early restoration of electricity supply otherwise they warned for taking stern action against Wapda. They announced for continuation of complete shutter down strike for 3 days. Talking to this scribe President of Trade Union Habib Hussain Mughal said that we have detailed a group of volunteer force to close any shop by force if its owner tried for its opening. A large number of general public also supported traders and assured for all kind of their cooperation in restoration for power supply as well as they also declared that trader’s agitations would be fully supported by masses. It is worth to mention here that main transmission line of 33 KV has been carried over the peak of snow bound Lawari top having altitude of 10500 feet from sea level which always damaged due to heavy snowfall and supply of electricity remain suspend for months after breaking and falling of poles and cables. While Sheshi power house of SHYDO only supply electricity to Drosh area similarly Reshun power house of SHYDO electrifying only limited areas of upper Chitral and remaining parts of Chitral especially town area badly suffering from longest breakdown.