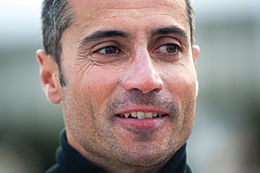 Milan, 11 November 2015 – Giancarlo Pedote won first place in the Multi50 class of the longest course across the Atlantic Ocean, the Transat Jacques Vabre, racing together with Erwan Le Roux on board the trimaran FenêtréA-Prysmian, supported by Prysmian Group, world leader in the energy and telecom cables and systems industry.

The Multi50 FenêtréA-Prysmian crossed the finish line of the Transat Jacques Vabre at 11:59:13 am (CET). It took Erwan Le Roux and Giancarlo Pedote 16 days, 22 hours, 29 minutes and 13 seconds to sail the 5,400NM orthodromic course from Le Havre, Normandy, to Itajaí, in southern Brazil. Thanks to this performance, the French-Italian duo won the Multi50s class and achieved third place in the overall rankings of the race, whose total miles equal the length of a quarter a world tour.

This is the third win of the Transat Jacques Vabre for Erwan Le Roux and the first one for Giancarlo Pedote, who this year participated for the first time in the race, after a very successful season. The result was not an easy one, as this edition will be remembered as a particularly difficult race because of the challenging weather and sea conditions in the early part of the racing field.

“We are very happy and proud of Giancarlo’s results. He is an extraordinary skipper and person, who once again succeeded in confirming his professional skills and his values by successfully winning this difficult race,” stated Valerio Battista, CEO of Prysmian Group.

This very successful season, marked by victories in several races (Grand Prix Guyader, Armen Race, Grand Prix Las Palmas de Gran Canaria and Trofeo Prince de Bretagne Sud Goël), saw its crowning achievement in one of the most prestigious regattas ever, confirming the fruitful collaboration with Prysmian Group, based on its mission to pursue excellence of performance, quality, competitiveness and innovation, while doing its utmost to respect the environment and use resources responsibly.