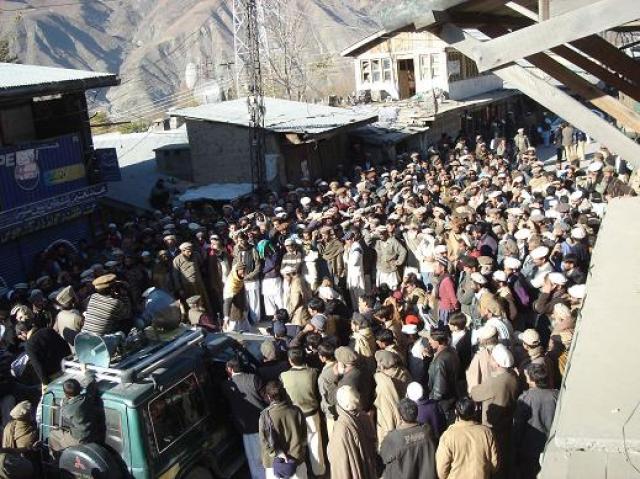 SHABQADAR (CHARSADDA): A 50 KV transformer of village Jalhar on Katozi Feeder of Sub Division Shabqadar have been damaged for the last 20 days as a result the entire area is plunged into dark as well as students facing great problems in preparing of their examination. A social worker from the area Muhammad Zeb told our correspondent on telephone that we have already repaired this transformer on self help basis by collecting contribution from consumers twice but it was damaged on third time. He said that this transformer has been approved for the area some 10 years ago at that time the village have less population but now its population have been increased in hundreds but the transformer is same. He said that due to overburden it damaging again and again and need for augmentation. He also criticized their elected representatives because Aftaf Ahmad Khan Sherpao is MNA and his son Sikandar Sherpao is MPA from this constituency but they never tried for solving of this problem. Social and political circle of the area have appeal Chief Executive Peshawar Electricity Supply company (PESCO) Muhammad Wali Khan, Chief Engineer Siddiq Awan and Superintendent Engineer Pesco Mian Muharram Shah for replacing of this damaged transformer and installing a 100 KV new transformer in Jalhar village so as to solve the problems because these poor people already paying their monthly utility bill but even than living in dark for the last 20 days. They said that we have already repaired it from our own pocket money two times but now it is not possible to repair it on third time.

CHITRAL: In order to mitigate suffering of flood affected people of Uchusht Chitral a cultural show and peace dialogue held at village Uchusht Chitral. After torrential rain and devastating flood entire population of Uchusht were in trauma and there was dire need of peace dialogue and playful activity for rehabilitation and bringing people of the area to normal life. In this connection Chitral Health Environmental Triad Association (CHEETA) organized and peace dialogue and cultural Show at village Uchusht Chitral.  It was supported and financed by Strengthening Participatory Organization (SPO) Peshawar and facilitated by Chitral Development Network (CDN). Known musical group of Chitral participated in the program while Assistant Coordination Officer (ACO) Chitral  Miftahuddin was chief guest of the Occasion. Dr. Shujauddin, Dr. Yehya,  Professor Muhammad Dost President CHEETA, Social worker Fazlu Rahman Shahid and Ansar Illahi along with others members participated in the program. Villagers in large numbers also participated in the cultural show and peace dialogue. A large number of people  like social workers, affected villagers and activists participated in the event. ACO Chitral termed the program a positive step towards promotion of peace and softening mental trauma of flood affected people in district Chitral. All the participants appreciated SPO Peshawar and CDN   for facilitating and financing the activity. Professor Muhammad Dost President CHEETA appraise of the participants about aim and objectives of the program, and all participants also applause CHEETA for planning and implementation of the cultural show and its   proactive role in social as well as developmental activities in district Chitral. Participants proposed that such activities should be arranged frequently for promotion of peaceful and enlightened and soft society in the area. Main objective of the event was enhancement of  mutual harmony and normalizing flood affected people who still live under great tension  and passing under psycho trouble.