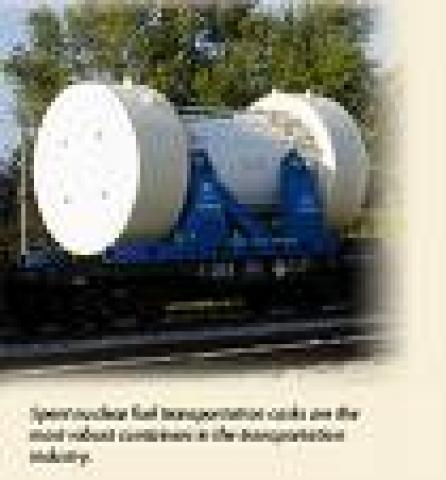 The Safe Transport of Spent Nuclear Fuel and High-Level Radioactive Waste in the  of the federal repository transportation program is including a lot of questions in terms of fundamental and social effects.

The core Committee for the Nuclear fuel Transport and the Department of Energy, could identify no fundamental technical barriers to the safest transport of spent nuclear fuel and high-level radioactive waste in the .

Transport by highway (for small-quantity shipments) and by rail (for large-quantity shipments) is, from a technical viewpoint, a low-radiological-risk activity with manageable safety, health, and environmental consequences when conducted in strict adherence to existing regulations.

However, there are a number of social and institutional challenges to the successful initial implementation of large-quantity shipping programs that will require expeditious resolution.

With the most usage of  rail option results in about a factor of 5 decrease in the number of shipments to the federal repository (53,000 mostly truck shipments versus 9600 mostly rail shipments) over a period of 24 years.

Moreover the rail option also results in almost a factor of 4 reduction in expected radiation-related fatalities during routine transport, from 15 fatalities to 4.

The number of expected fatalities for the maximally reasonably foreseeable accident is higher for the rail option than for the truck option (five fatalities versus less than one fatality), but the likelihood of occurrence of such a rail accident is very small (less than 3 in 10 million chances of occurring per year).

Railroads in the are privately owned and operated, which allows for greater control over other activities on the rail line and a more coordinated regime for carrying out safety inspections.

Rail transport can also result in reduced shipment travel times, especially if dedicated trains are used, which allows for the more efficient utilization of transport packages and conveyances.

Filed under: Health & Science, US
Share Tweet Pin G Plus Email
previous article: “SUZUKI” in Research and Development
next article: Sun, Sand and Self-defense: New things to do on your vacations