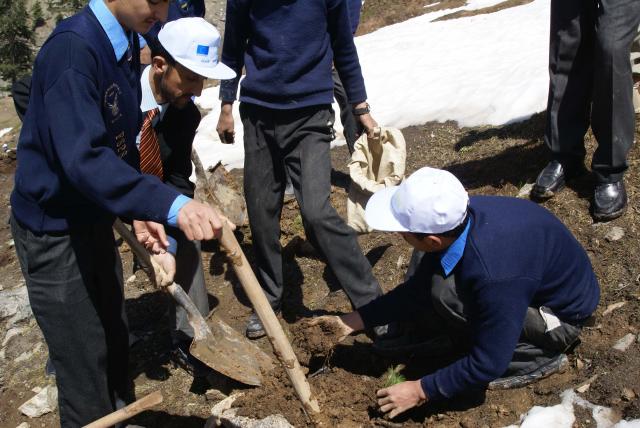 CHITRAL:  Tree   Plantation drive kicked at Lawari top area of southern Chitral. Some 25000 sapling would be planted at Ziarat and Lawari top area. Tree plantation drive was kicked by Sarhad Rural support program (SRSP) a project of program for economic advancement and community empowerment (PEACE). Tree plantation campaign was launched under Youth development activities of European Union Peace project. Commandant Chitral Scouts Col Nasir Khan Jadoon was chief guest on the occasion while students of different schools of Drosh and Chitral also participated in these biennial activities.  Talking to this scribe Col Jadoon said that we onboard students of different schools to motivate and aware them regarding importance of plantation and harm of deforestation. As well as to familiar them with tree plantation in their practical life.  He said that Lawari top area having rich forest in past but unfortunately it decreasing day by day and we want to restore deficiency of forestation in this area and once again covert it in a green paradise. He said that some 12000 saplings were planted on first day and the remaining one would be planted next day to achieve our target of 25000 sapling plantation.  Responding to a question he said that we will request district administration for imposing section 144 on grazing of goats at least for 3 months to save these plants from excavation.

Tariq Ahmad district Program Manager of SRSP said that we donated some 25000 plants to Chitral Scouts for this tree plantation campaign so as to success in our aim for enrichment of forestation at this area. He said that we kicked different activities regarding plantation drive at Chitral and wants to restore deficiency of forest in Chitral. A student of class 9th said that we participated in this campaign on volunteer basis so as to convey a message to masses as well as to other students of the country to must plant a single sapling every year and we will overcome on deforestation problem. Another student said that we face erosion of earth, natural calamity , flood etc  due to deforestation and if every citizen of Pakistan participate in this campaign to plant a tree every year we will be save from these calamities. At last students also presented a culture show with Chitrali music, folk dance and songs to communicate their message by this way to pubic for protecting these sapling and tree. A large number of students, military officers, Chitral scouts cops and other participated in tree plantation campaign. They said that trees are using for multipurpose and we should to protest them.