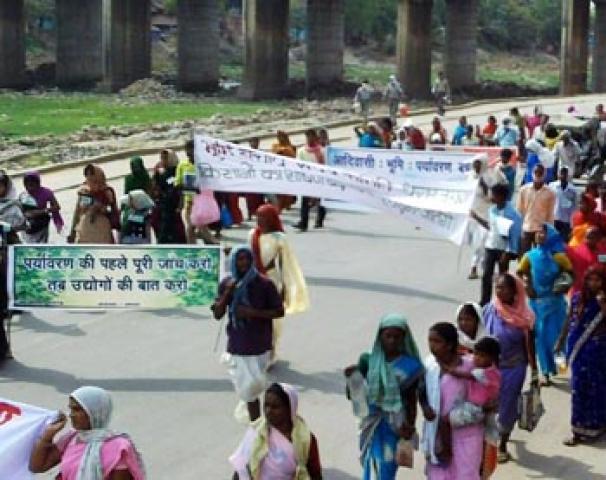 Bhan Sahu is one of the thousands of poor tribals made landless by govt development program in India’s Chhattisgarh state. In Chhattisgarh Maoists rebels are engaged in a violent guerrilla war against the govt troops. The govt accuses the Moists of exploiting the tribals, while Maoists say they are fighting it for them. So, which side are the tribals on? Why? A video produced by Bhan Sahu gives us an answer to that.

Chhattisgarh state of India has a dubious distinction: The land of bloodbath

In past 4 months alone, the Maoists, also known as Naxalities, have killed over 300 people – mostly policemen and army soldiers – deployed by the government in the state. Prime Minister Manmohan Singh has described their insurgency as India’s biggest internal security challenge.  The Maoists say, they are fighting it for the state’s poor, especially the tribals.

Bhan Sahu is a poor tribal who comes from Rajnandgaon district, considered heartland of Maoist activities. She is also a community correspondent for IndiaUnheard, the community news service.

4 years ago Chhattisgarh government built a dam in Rajnandagaon district. Known as Mogra dam, the project has left over 15 thousand people in 14 villages landless. Bhan Sahu is one of them.

According to Bhan Sahu her community is affected in following ways:

• The land taken by govt for dam was agricultural land. As a result her community members have lost their main source of locals’ livelihood.

• Compensation offered by the government is inadequate as it includes only money and no livelihood options.

• The price of the land offered by the govt is also as per the market rate in the 1967 – when the dam was first planned.

While building the dam, govt had said, it would provide water for irrigation. Ironically, in the 14 tribal villages, people continue to have acute water shortage as they are not supplied the water of the dam.

The dam, however is only supporting a cluster of industrial units – about 30 of them –  in the district.

The situation has forced the locals to migrate to other areas of the state in search of a livelihood. The dam affects a total of 56 villages in the state. On an average over 200 people are forced to migrate each year from each of these affected villages.

Some have decided to stay back and fight.  Bhan Sahu is one of them. She visits the affected villages, organizes rallies, addresses people and encourages them to keep demanding what is their right. And what are the rights they are fighting for?

“The govt took our land and made us homeless. We need land to build our home. The govt is turning us into daily wage labourers in the same land where we grew our food. We don’t want the paltry monetary compensation.”

In the rallies people often get emotional. They talk about govt apathy and then they also start talking about Naxalities. The govt accuses the Naxalities for exploiting this emotion of tribals and make them turn against govt. It says, Naxalities are forcing the tribals to oppose development.

It doesn’t. What really matters is that Bhan Sahu, as a community correspondent is sharing the stories of the people in that land where the state govt has imposed an unspoken news censorship. Bhan Sahu is defying that censorship, even while leading her community struggle from the front.