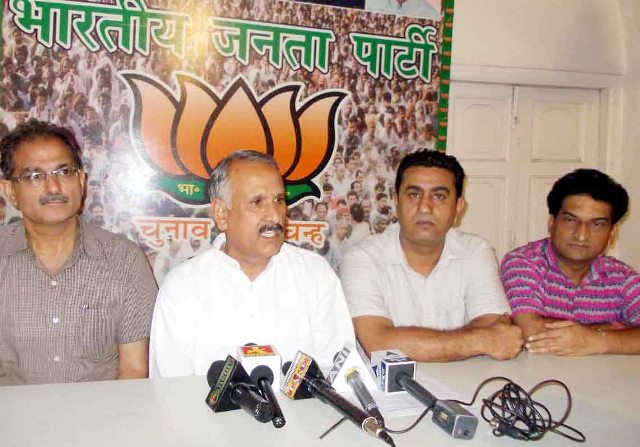 Jammu, August 16 (Scoop News)-BJP National Executive Member & former State President Shamsher Singh Manhas stated that 67th Independence Day haranguing address by State Chief Minister Omar Abdullah indicated his frustration and bereft of normal bearings due to his utter failure to curb the communal and extremists elements of NC in his government.
Shamsher Singh Manhas was addressing a press conference in Jammu today.Commenting on the Omar’s accusation that BJP National leaders did not visit any communal riot hit place in the country excepting J&K where a minor communal incident took place in Kishtwar, Shamsher Singh Manhas said that it seems he is not aware that it is only in J&K state and in his beloved valley, where demographic change has been brought about by violent means by extremists forces. It is for this reason that BJP national leaders sought to come to the state to instil a sense of security and well being amongst the victims of the riots. He added that it seems Omar has forgotten that from Kashmir valley miniscule minority was not tolerated and was forced to leave. Going by the sequence of events that presaged the actual riots in Kishtwar and coupled with the total inaction of the administration for eight long hours during riots under the conniving gaze of his Home Minister present in Kishtwar town, one is left with the impression that Omar’s administration has been complicit in these riots hoping to repeat the valley’s happening and bring about demographic change there also. This complicity of his government was pre-planned on the considerations of vote bank politics. He reminded Omar that since last four weeks 28 militants have been eliminated by army in the state and have captured huge arsenal and this sudden increase in the militant activity has emboldened rank communal elements of Omar’s government to indulge in communal riots. By trivializing Kishtwar riots as minor occurrence, the Omar Abdullah has betrayed his insensitivity and callousness. He posed the question to Omar Abdullah to explain as to from where the flags of Pakistan and posters of Afzal Guru, Maqbool Bhat and Shabir Shah appeared in the town before and during the occurrence.
Manhas further castigated Omar for accusing BJP of seeking trifurcation of the state on communal considerations. He reminded Omar that Ladakhi Buddhists demand for separating their region and make it a Union territory has not been brought about by BJP. This demand of Buddhists is decades old when BJP had no presence in Ladakh. The Chief Minister ought to do some soul searching in this regard and try to find out why Buddhists want separation. The demand for separation by Ladakhi Buddhists and Jammu people is on account of gross discrimination, exploitation and over-lording by valley-centric rulers of the state and BJP has nothing to do with these reasons for separation.
Manhas expressed disappointment with the address of the Chief Minister on account of its being divisive and not inclusive as it should have been since the occasion was celebration of Independence Day and not a political rally.
State General Secretaries Kavinder Gupta and Rajiv Jasrotia and State Press Secretary Balbir Ram Rattan were also present in the press conference.
MORE AT http://scoopnews.in/det.aspx?q=31265