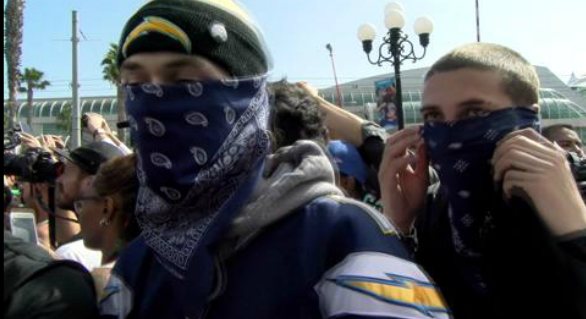 Republican Party nominee-apparent for US President, Donald Trump arrived in San Diego Friday kicking off a bright Memorial Day weekend.  There wasn’t any violence among protesters and Trump supporters, but protesters did keep police on their toes.

It wasn’t until almost an hour after Trump’s departure that the two sides of the crowd began to get a little more… energetic in taunting each other. Finally, police intervened and firmly separated the two sets of protesters to opposite sides of the street.

It looked for a minute as if things had calmed down a bit and police had restored order.

But Police apparently noticed some in the crowd planning further action and took decisive measures.   About this time, the crowd was officially ordered to disperse, but police apparently knew it might be tough to tell stray protesters from ordinary Friday night revelers enjoying San Diego’s famous GasLamp District.

It soon appeared that most Trump supporters had dispersed, but the protesters continued to confront police and a special detail including SWAT was sent in to push the protesters back onto Harbor Drive, an area barren of un-involved onlookers and Friday night restaurant-goers.

San Diego’s police chief told reporters that 26 different uniformed law enforcement agencies were present to help with public safety Friday.   She later reported only about a dozen arrests at the event.

Finally, a police line advanced in force down Harbor Drive to push the last of the protesters completely out of the area, and San Diego’s residents and visitors could enjoy their Friday night in the GasLamp with fewer distractions.

Filed under: News, Politics
Share Tweet Pin G Plus Email
previous article: How to check Keyword Competition Manually
next article: 6 Ways Businesses Can Save Money and Invest in Expansion