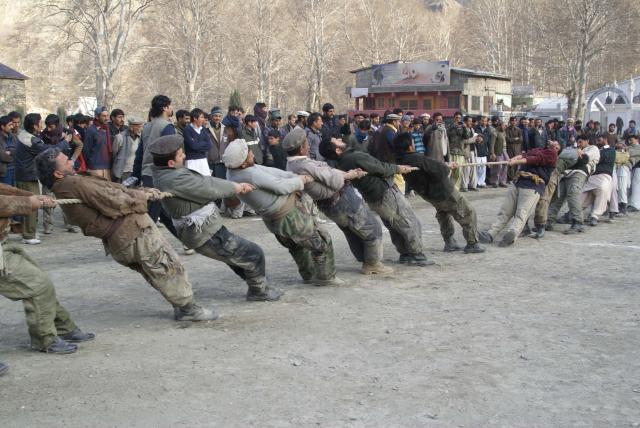 CHITRAL:   Tug of war is a famous and popular game of Chitral is liking by youth and aged people equally. A tug of war match was contested between Singor and Faizabad team which was organized by District youth club in collaboration with Aga Khan Rural Support Program. His highness  Mehtari Chitral Fatihul Mulk Ali Nasir was chief guest on the occasion. Singor team defeated Faizabad team in first half and score second round in second half and win trophy of final match in Tug of war. Chief guest Fatihul Mulk Ali Nasir announced  cash award of rupees 11000 for winner team and 5000 for runner up team. He stressed upon the players to maintain their best civilization and continue such fruitful activities which is best for physically and mentally fitness and for strong muscles. At last chief guest distributed trophy, cup and awards among the players. Earlier that youth participated in 100 Meters long race competition. At the end of match Players presented folk dance on the beating of drum and folk music. A large number of people participated in final match of Tug of war.