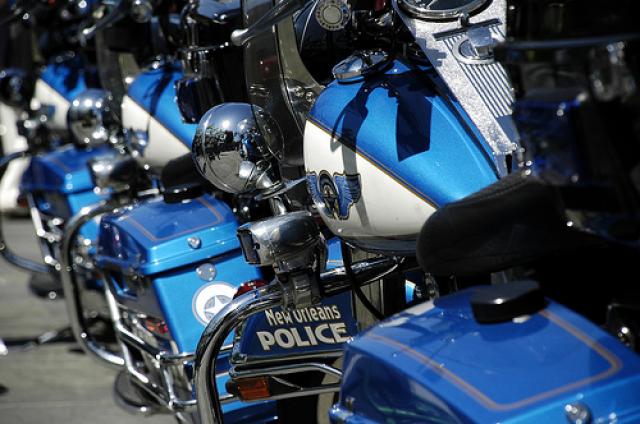 A federal grand jury indicted two New Orleans police officers today for lying and obstruction of justice in connection with the shooting death of Danny Brumfield Sr., a 45-year-old man shot in the back by police in the days after Katrina.

Police said they fired a single blast from a shotgun at Brumfield after he jumped on the hood of their squad car and made a lunging motion with a "shiny object" through the passenger window. According to the police version, a pair of scissors was found near where Brumfield fell to the ground. The presence of the "shiny object" and the threatening manner with which it was wielded, gave the officers justification to shoot, an NOPD investigation into the shooting found.

But in today’s indictments, the grand jury said the officers had perjured themselves when they testified about the shooting in a 2007 civil lawsuit brought by the widow of Brumfield, and that Brumfield had been waving his hands — not an object — at the officers immediately before the shooting occurred.

According to the six-count indictment, Brumfield was attempting to flag down the police and then "either jumped on the hood of the car or was hit by the car and landed on the hood."

Officer Ronald Mitchell offered the official version when he testified in 2007 about the shooting. But the indictment said he "well knew" that Brumfield did not "jump off of the hood of a patrol car and lunge at him with a shiny object."

The indictment said that Officer Ray Jones lied under oath in 2007 when he testified that the officers stopped the car to assess the condition of the wounded man. Jones "well knew" that this did not occur.

The grand jury heard testimony from Kevin Diel, a former New Orleans police officer who said that when he arrived upon the scene on Sept. 3, 2005, he was told by colleagues that Brumfield had been wielding a gun.

"They told us, you know, the guy jumped on the hood of the car, tried to shoot the passenger, the officer that was sitting in the passenger seat," Diel said in an interview conducted as part of an investigation by ProPublica, the PBS program Frontline and the New Orleans Times-Picayune.

"They said that he had pointed a chromed revolver at him through the window, after jumping on the hood, and the passenger officer had fired a single shot from a shotgun and shot and killed him," Diel said.

Diel said he noticed several NOPD cars leaving as his unit arrived, just after dark. But beside that, he said, it was fairly quiet. The crowd was less angry, less chaotic than he imagined it would be, given the conditions.

"It absolutely was not some crazy mob of people," Diel said he told the grand jury. "They were obviously irritated, but overall it was not a threatening crowd… We felt safe enough that we were taking turns taking naps on the hood of our patrol car in the crowd."

Diel’s account of the mood of the crowd contradicts the official version in which officers Jones and Mitchell said the crowd was unruly, they were being shot at, and had to immediately retreat to a safer area.

The killing of Danny Brumfield is one of at least nine investigations that the federal Department of Justice has opened into the New Orleans Police Department, the majority of which focus on the days immediately after Katrina.

U.S. Attorney Jim Letten would not say he chose to focus on perjury and obstruction of justice rather than the officers’ actions in shooting Brumfield. "The indictment that we sought and received is driven by the evidence that we have in the case," Letten said.

The 2007 lawsuit, brought by Brumfield’s wife, resulted in an out-of-court settlement of $400,000 settlement, which was paid out by the city in 2008. Because the case never went to trial, neither the officers’ testimony nor the details of the subsequent NOPD investigation were made public.

One aspect of the lawsuit that was made public, however, was that NOPD homicide detective DeCynda Barnes had neglected to look at Brumfield’s autopsy when she was conducting her follow-up investigation into the shooting. In her report, she wrote that Brumfield had been shot in the shoulder, when in fact he was shot in the back.

Attorney Eric Hessler, who represents Officer Jones, previously dismissed Diel’s account as rumor. He could not be reached for comment today. Officer Mitchell’s lawyer, Kerry Cuccia, said he had no comment.