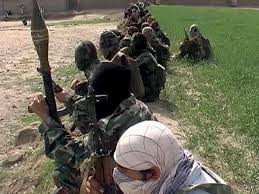 The US Military, specifically the US Army  refuses to stop access of billions of dollars in lucrive reconstruction contracts to known supporters of the Afghan insurgency according to SIGAR. How freaking stupid is that?

I received the following email communication from Alex Bronstein-Moffly , the Director of Public Affairs ,Special Inspector General for Afghanistan Reconstruction

–After six years of being publicly reported, Afghan National Security Forces (ANSF) data is now classified.  The decision leaves SIGAR unable to publicly report on most of the $65 billion U.S.-taxpayer-funded efforts to build, train, equip, and sustain the ANSF.

–Memo from Resolute Support Commander regarding classification of data (page 217)

–Despite the requirement of Public Law 110-181 that federal agencies provide requested information or assistance to SIGAR, the State Department did not answer any of SIGAR’s questions on economic and social-development this quarter, and failed to respond to SIGAR’s attempts to follow up. (page 147)

–Congress has appropriated nearly $107.5 billion for Afghanistan reconstruction. Of this amount, $15.3 billion remains in the funding pipeline for potential disbursement. (page 74)

–Despite more than a decade of multilateral efforts, achieving effective coordination of assistance to Afghanistan remains an elusive goal for the United States, other donors, and the Afghan government. (page 3)

–SIGAR is encouraged by the fact that the new U.S. military leadership in Afghanistan shares our concerns about the U.S. Army’s refusal to suspend or debar supporters of the insurgency from receiving government contracts. (page iii)

Please don’t hesitate to contact me if you need any additional information or have any questions.

The US flew 12 billion  in cash, shrink wrapped, on pallets, in hundred dollars bills – at least $9 billion went missing. $3 billion in cash has been moved through Kabul airport. $Tens of billions given to warlords – See video: https://www.youtube.com/watch?v=EHjosqIJ7hs

See video: US TAXES FUND TERROR! (How the US Funds the Taliban) https://www.youtube.com/watch?v=c2W2E-00Czg

Filed under: Military, News
Share Tweet Pin G Plus Email
previous article: Senator Mikulski confirms “drones” have landed on the White House lawn before
next article: Syrian army has been and remains the most effective fighting force against ISIL insurgents on the ground in Syria