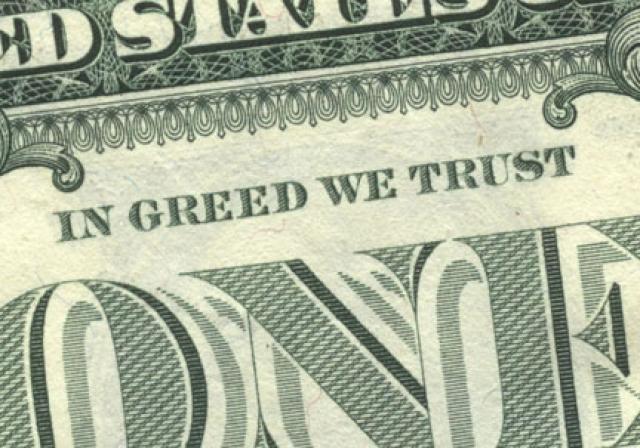 The American people and the rest of the world continues to be deceived in the face of the prevailing economic crisis. What America needs towards its economic rejuvenation is not a bailout, but instead a total breakaway from capitalism. That is not to say that America and the rest of the work should in any way emulate the disastrous example of the former Soviet Union. The former Soviet Union was not a free market. But that does not mean that it too was not capitalist. Indeed, capitalism can start off as a free market; but as the big fishes "gobble-up" the smaller little fishes, it eventually resembles more and more the former Soviet Union, Nazi Germany, or alternatively, the contemporary People’s Republic China. Haven’t you noticed that the so-called "War on Terror" is being used as an excuse to turn the United States into some version of the former Soviet Union, Nazi Germany of China?

The problem with capitalism is self-evident in its name, and is practical operation. Capitalism is about ‘capital’, and is not centred around the affirmation of the quality-of-living of people. Americans, for example, have witnessed a bail out scheme in which politicians have sought to focus on allocating a "bail-out" not to distressed communities, but instead to the principal owners of capital associated with its financial system of predators. Instead of allocating "bail out" money directly into a socially responsible manner into vital quality-of-living oriented Human Development inspired programmes, the politicians have sought to appease the "banksters".

The new U.S. President Barack Obama supported a bail out scheme that favours the owners of capital that indeed backed his Presidential campaign, over the interests of his campaign’s many small donors. It is apparent that Obama shows the slick oratory of a charismatic tele-evangelist. But, when times comes to choose between capital and people, it is apparent that Obama is squarely for ‘capital’ over people. Just like Bush, and other Presidents before him, did support to owners of ‘capital’ is supposed to end up "trickling down" to ‘the masses’. But Americans, and other disenfranchised people, now witness that in spite of the tele-evangelical like oratory gifts of Obama, that is not how capitalism operates.

Capitalism is a pathology. It is not about "freedom" or ‘democracy’ as Milton Friedman, and other capitalist ideologues has suggested. Indeed, capitalism eats away at freedom and democracy. This is because owners of capital view democracy as the enemy, that threatens their desire to pursue insatiable greed and power. Capitalism is a sort of implanted virus, that is enforced against Americans, and other people, through a fear, that the only alternative is "socialism" or even worse "communism". Whereas, the practice of "socialism" and "communism" in human civilization could instead be simply viewed as being mutations of the same basic common denominator.

What is that denominator? The practice of capitalism has existed in any human society which places the accumulation of materialistic wealth, i.e. capital, and power, over the affirmation of the quality-of-living of people.

It is apparent that the U.S. bailout is a scam to legitimate the theft of the American public treasury on behalf of a political-military-industrial complex that seeks to use the bail out money to consolidate power. Principal owners of capital tend to views a vibrant and educated "middle class" as an intellectual threat with their "rhetoric about human rights and environmental protection"; and they view the poor, as "chattel for industries", and who must be kept in their place. The logic of the capitalist system would therefore not be to substantively help the American people, but instead, to exploit the situation, while fooling the American people into thinking that help is just around the corner.

The owners of capital are apparently using economic destabilization caused from their own predatory activities, to grow in a larger capitalist monstrosity of government in collusion with Big Businesses. In effect, the Obama-sponsored bail out, appears to be a morphing of the ‘free market capitalism’ into the ‘bureaucratized capitalism’ of the Nazis or of the proto-Stalinists.

The chance that the owners of capital are actually sincerely pursuing the rescuing of the American economy, is about the same chance that a heavyweight boxer helping an adversary in the boxing ring, back on to his or her feet, after being down or knocked out. The capitalist system is indeed a predatory system, and its machinations including so-called "bail out" motivations can be critically appreciated by appreciating its natural predatory tendencies. As it develops it becomes more and more predatory. Political systems like democracy end up being replaced.

Once Americans can appreciate Communism, i.e. the former Soviet Union and China and Nazism, i.e. Germany under Adolf Hitler, as being a latent stage of post-free market capitalism, then Americans might begin to contemplate the direction where elites may now be seeking to take America. However, America can be rejuvenated, by a system of economic democracy, which places people and the vital ecological systems that people depend on for their quality-of-living, over a context of capital, that drives a system of de-humanization.

Economic democracy of the sort which reinforces a political context of democracy is the alternative to a prevailing context of de-humanization that undermines human rights, social justice, global peace through a fabricated "War on Terror", and that undermines environment protection. Once Americans can institutionalize a system that serves "We the people", and not "We the owners of capital", they can begin to achieve the constitutionally-inspired mutualistic and participatory society of many American progressive visionaries that include Robert F. Kennedy, and Martin Luther King Jr, sought to inspire.

Indeed, Native American elders, who have sought to defend indigenous values of living in empathy with each other and with Nature embrace values that are vital to the vitally needed transformation of American from a decaying capitalist society, into a quality-of-living affirming, mutually reinforcing, revitalized, and socially responsible political and economic democracy. Accordingly, Americans would need to restructure and replace the fundamental dynamic of ego-driven and self-serving elite-driven power, in order that they may proceed on a path of socio-economic recovery and rejuvenation.

It is arguably very likely that elites will continue to exploit the prevailing economic decline in America that they had created, so as to continue to use those destablized conditions for their own cynical advantage. Unless Americans transform their economic system, from capitalist context of decline, into a quality-of-living oriented synergistic economic democracy, worsening malaise in America is imminent.

Quality-of-Living and Human Development as the Outcome of Economic Progress, ISBN: 1897036353.