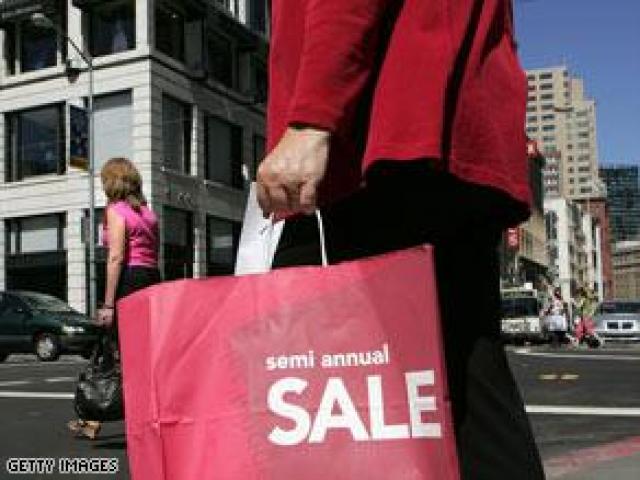 WASHINGTON (AP) — Wholesale inflation soared in July, leaving prices rising at the fastest pace in nearly three decades. While recent declines in oil and other commodity prices raise hopes inflation may have peaked, some economists worry about the widespread nature of the July price surge and caution it will take more time for that pressure to ease on Wall Street and .

The Labor Department reported Tuesday that wholesale prices shot up 1.2 percent in July, pushed higher by rising costs for energy and a variety of other products from motor vehicles to plastic goods.

The increase was more than twice the 0.5 percent gain that economists expected and left prices rising over the past 12 months by 9.8 percent. That marked the biggest annual increase since the 12 months ending in June 1981, a period when the Federal Reserve was driving interest rates to the highest levels since the 1861-1865 U.S. Civil War in an effort to combat a decade-long bout of inflation.

Core prices, which exclude food and energy, rose 0.7 percent last month. That increase was the biggest since November 2006 and more than triple the 0.2 percent rise in core prices that had been expected.

Elsewhere, the Commerce Department reported that construction of new homes and apartments slid to an annual rate of 965,000 units in July, a 17-year low. Builders continued to slash production as they battled slumping sales and soaring mortgage defaults dumping more homes on an already glutted market.

Wall Street tumbled on the gloomy economic news as investors worried the worst housing slump in decades was showing no signs of a rebound and that the Federal Reserve’s tool to combat the weakness — lowering interest rates — was unlikely to be used given the sharp jump in inflation seen last month in both wholesale and consumer prices.

The Dow Jones industrial average fell 130.84 points to close at 11,348.55 after losing 180 points on Monday. It was the worst two-day performance for the Dow since late June.

Last week, the government reported that consumer prices had jumped by 0.8 percent in July, leaving prices over the past 12 months rising at the fastest pace since 1991.

The steep slump in housing, rising unemployment and a severe credit crisis have worked to offset $92 billion in economic stimulus payments made from April through July intended to keep the economy out of a deep recession. Retail giants Target Corp. and Home Depot Inc. on Tuesday reported that profits sank in the second quarter. Home Depot said it continued to have a downbeat outlook for the year as the housing market shows no signs of recovery.

The July price pressures reflected in part the surge in energy costs that pushed crude-oil and gasoline prices to record highs. Crude-oil prices have fallen by more than $30 per barrel since then, raising hopes that inflation pressures will soon ease.

But the price spikes seen elsewhere in July prompted concerns that the prolonged surge in energy was beginning to show up more broadly throughout the economy, and that while prices may rise quickly, they tend to come back down much more slowly.

"Inflation is way too hot," said Joel Naroff, chief economist at Naroff Economic Advisors in Holland, Pennsylvania "It took a long time for the surge in commodity prices to seep into the general economy so don’t expect one month of commodity price declines to suddenly turn off the inflation pump."

But other economists said they believed the July inflation report could represent the worst for inflation pressures this year if — and they concede this is a big if — energy prices continue to decline in coming months.

"A firmer dollar, retreating commodity prices and continued economic weakness should damp inflation by the fall," said Sal Guatieri, an economist at BMO Capital Markets in , who said he looked for elevated inflation numbers at both the consumer and wholesale levels for another month before they start declining.

Economists saw a silver lining in the continued plunge in housing construction, saying it is needed to help reduce the glut of unsold properties as builders compete with foreclosed homes selling at steep price discounts.

In Crawford, Texas, where President George W. Bush is vacationing, spokesman Tony Fratto said the big jump in July producer prices did not "reflect the recent significant fall in oil prices, which everyone would like to see continue."

The Federal Reserve is caught between a slumping economy, as reflected by the further plunge in housing construction, and the big jump in inflation pressures, which has some Fed officials lobbying for the central bank to start boosting interest rates.

The Fed, which aggressively cut interest rates from last September through April, has held rates unchanged at meetings in June and earlier this month. Richard Fisher, president of the Fed’s regional bank, dissented at both those meetings, arguing the central bank should start raising interest rates to make sure the inflation surge does not become embedded in the economy.

"We cannot afford to gamble away our credibility," Fisher said Tuesday in a speech in . He warned that the recent burst of inflation could threaten the economy as "a lingering inflationary fever."

Rebecca Braeu, an economist at John Hancock in , said that the big jump in core inflation in the wholesale price report would definitely set off alarm bells at the Fed. But she and other analysts said they did not believe the central bank will start raising rates, especially before the November election, as long as price pressures begin to moderate in upcoming reports.

For July, wholesale energy prices jumped by 3.1 percent following a 6 percent gain in June. That increase reflected big increases in the price of natural gas, home heating oil and liquefied petroleum gas, which offset a 0.2 percent dip in gasoline costs.