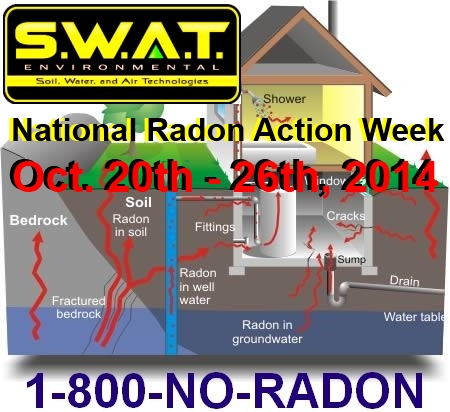 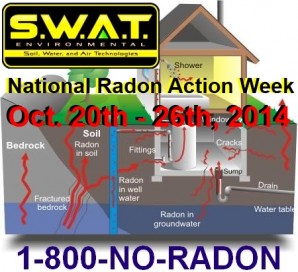 1888 PressRelease – October 20th – 26th, 2014 has been designated as National Radon Action Week in The United States. Health agencies throughout the country have joined forces to promote awareness of this household Class A Carcinogen. S.W.A.T. Environmental is North America’s largest radon testing and radon mitigation company and is participating in the October awareness drive by offering 1,000 radon testing kits.

The U.S. Environmental Protection Agency has designated the week of October 20th – 26th (third full week of the month) as “National Radon Action Week” in the United States. Radon gas will kill and estimated 22,000 Americans this year, second only to smoking as the leading contributor to cancer of the lungs.

Radon is a radioactive noble gas with no color and no odor. It is one of the densest substances that remains a gas in normal conditions and its colorless odorless nature make it very difficult to detect. In addition to this, every isotope of Radon is radioactive. The most stable isotope has a half life of just under four days, decaying into equally radioactive substances, both of which are solids and easily stick to objects, such as dust. This compounds the risk of radiation poisoning, especially if these substances get in a person’s lungs. Radon Awareness Week or National Radon Action Week is very important in bringing attention to this potentially very serious health threat.

Radon Awareness Week or National Radon Action Week is the third full week in October and is designed to help teach homeowners How to protect themselves from this difficult to detect radioactive gas. Despite the fact radon has no color or odor there is a few ways to detect it without equipment. Some people say they have an odd smell in their home, while others are simply ill more often. It is important to take care of the problem as soon as possible especially since radon is a leading cause of lung cancer. Radon Awareness Week is also a wonderful way for companies that specialize in radon detection and cleaning up radon issues to advertise their services. Radon Awareness week serves as a great way to begin teaching people exactly what they can do to protect themselves.

A National radon mitigation company (SWAT Environmental) has offered to give away 1,000 FREE radon test kits to help homeowners detect this silent killer in their homes. Having helped over 100,000 families remove radon from their homes, SWAT Environmental has fixed more “radon-infested” houses and buildings than any other contractor in North America. According to SWAT Environmental’s President, Jamey Gelina, “Radon testing can be completed in just a few days and when elevated levels of the gas are detected, the remedy is as simple as calling 1-800-NO-RADON.” In most cases, a radon mitigation system can be installed in a single day and for the cost similar to many other “minor household repairs.”

Again, the week of October 20th – 26th is National Radon Action Month. Take this opportunity to check your homes, schools, and workplaces for this invisible predator. Learn more at
http://www.RadonWeek.org or by calling your local health department.