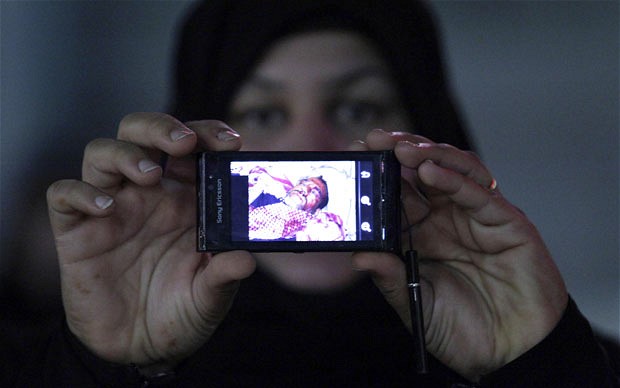 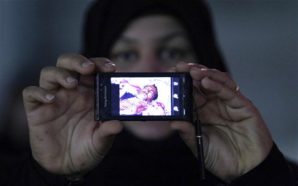 A woman shows a picture of her husband beaten and killed by the police and military security forces in Bahrain.

Secretary Hagel met with His Majesty King Hamad al Khalifa of Bahrain this afternoon at the Safria Palace.

The secretary and the king exchanged views on shared regional security challenges, including Iran and how the signed joint plan of action between the P5+1 and Iran.

The meeting included significant discussion of reform in Bahrain and the importance of political inclusiveness for long term stability. The secretary thanked King Hamad for hosting the U.S. 5th fleet and ongoing security cooperation.

It should be noted that Bahrain’s record on human rights  has been described by Human Rights Watch as “dismal”, and having “deteriorated sharply in the latter half of 2010” (source: HRW report http://www.hrw.org/en/world-report-2011/world-report-2011-bahrain). There is also serious allegation of torture in Bahrain. Reports also indicate that Bahrian police beat protesters and women (see video: http://www.youtube.com/watch?v=fZB1ukZAsBg).

We called the Pentagon press office to inquire about allegation of torture, rape, killing, murder of protesters in Bahrain and officials there refused to discuss he situation.

According to the State Department notice Bahrain is dangerous in the extreme:

“Spontaneous and at times violent anti-government demonstrations occur in some neighborhoods, particularly at night and on weekends. These demonstrations have included blockades of major highways with burning debris and the establishment of unofficial checkpoints. Participants have thrown rocks and Molotov cocktails and used various other homemade weapons, to include improvised explosive devices and shotgun-like projectile launchers. The Ministry of Interior maintains official checkpoints in some areas and routinely uses tear gas and stun grenades, along with birdshot and other crowd control measures, against demonstrators. Violent clashes between security forces and demonstrators can make travel in and around Bahrain dangerous without advance warning.

There have been no direct attacks on U.S. citizens; however, Westerners and U.S. citizens have been caught in the middle of clashes. Anti-U.S. sentiment has been expressed on the streets and in some local press, and U.S. flags have occasionally been burned during demonstrations. U.S. citizens are urged to remain alert to local security developments and to be vigilant regarding their personal safety by knowing the locations of police and fire stations, hospitals, and the U.S. Embassy. The Department of State strongly urges U.S. citizens to avoid all demonstrations as even peaceful ones can quickly become unruly, and a foreigner could become a target of harassment or worse. If you are in immediate danger, call the police at 999.

The U.S. Embassy restricts its employees from traveling to specific areas and advises all U.S. citizens to do the same” (source: State Department http://travel.state.gov/travel/cis_pa_tw/cis/cis_1001.html#safety).

Despite serious and ongoing human rights abuses and allegation of torture and abuse the U.S. government has released military aid to the Bahrain dictatorship as recently as 2012/2013 http://www.ctvnews.ca/u-s-releases-more-military-aid-to-bahrain-1.808593

Filed under: Military, News
Share Tweet Pin G Plus Email
previous article: Business Lessons Learned from the Back of a Horse
next article: Amid allegations of torture and abuse U.S. military remains supportive of brutal monarchy in Saudi Arabia