The U.S. Congress has passed a bill with sanctions for Iran, Russia, and North Korea. The various sanctions build on different platforms of foreign policy with these three countries. However, the designation of the Islamic Revolutionary Guard Corps (IRGC) has been welcomed by the Iranian resistance, the National Council of Resistance of Iran (NCRI). This was one of the main points of the NCRI strategy for dealing with the regime and forcing a peaceful regime change. 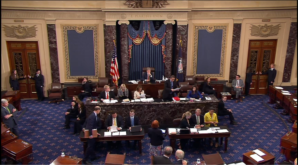 “Since several years ago, the Iranian Resistance had urged the terrorist designation of the IRGC, as it preserves the entirety of the clerical regime and acts as its main apparatus for domestic suppression and export of terrorism and fundamentalism. However, the policy of appeasing the mullahs’ religious dictatorship paved the way for the IRGC and its proxies’ rampage in the entire region,” said NCRI President-elect Maryam Rajavi in a statement on the recent events in the U.S.

She also underscored the need to immediately and completely implement these sanctions and their respective provisions. She emphasized there should be no loopholes that allow the regime and its official and unofficial entities, as well as its domestic and foreign interlocutors to evade the implications of the bill.

Rajavi also urged other countries, in particular the EU and the Middle East nations, to adopt these sanctions, thus denying the regime the opportunity to take advantage of its diplomatic and commercial ties with them to continue to suppress the Iranian people and export terrorism and war to the rest of the region.

“The immediate implementation of sanctions against the IRGC and its affiliated entities must be coupled with the expulsion of IRGC and its affiliated militias from the Middle East, in particular from Syria and Iraq. This is indispensable to the enactment of this Act and a prerequisite to ending conflict and crisis that have engulfed the region,” said Rajavi.

Yet, the NCRI also acknowledged that this designation is just a first step. Driving the IRGC out of the region will cripple the regime, thus making it possible for a peaceful regime change to take place. Current conditions within Iran have made the regime even more unpopular, as Iranians struggle to care for their families and see the economic benefits of the 2015 nuclear agreement going to the ruling class primarily.

Recognition of the Iranian people’s desire and right to overthrow the mullahs and establish democracy and freedom in Iran is the greatest contribution to peace and tranquility in the Middle East and the world.