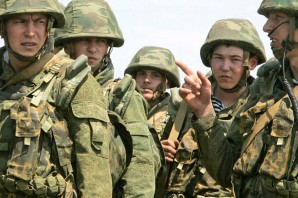 Elite Russian Marines near Moscow during military maneuvers in 2013. Such forces could be called upon to defend the “motherland” from the United States in Europe in the event of war.

Russia may eventually be forced to withdraw from the Strategic Arms Reduction Treaty (START), the Russian Foreign Ministry’s top disarmament official, Mikhail Ulyanov, has warned, if the United States continues on the path of building its European Missile Defense Shield.

A move that is seen as a provocation and threat to Russian national security.

“We are concerned that the US is continuing to build up missile defense capability without considering the interests and concerns of Russia,” Ulyanov told Interfax. “Such a policy can undermine strategic stability and lead to a situation where Russia will be forced to exercise [its] right of withdrawal from the [START] treaty.”

Ulyanov said that the legal basis for Moscow to scrap the START treaty is legislated for within the text of the agreement, which Russia says it has so far fully implemented. In certain exceptional cases, involving a known threat to national security, both Russia and the US have the option to quit the treaty.

“The statement on missile defense made by the Russian side on April 8, 2010, at the signing of the START Treaty, explicitly states that such exceptional circumstances include the build-up of missile defense systems by the United States, which threatens the potential of Russian Federation’s strategic nuclear forces,” Ulyanov said. “A similar [regulation] is contained in the Federal Law on the Ratification of the New START treaty.”

Ulyanov said that “at the current stage” Russian experts estimate that the US missile defense system“has not yet reached a level that would represent a threat to the efficiency of Russian strategic deterrence forces”, said Ulyanov in a interview with RT news.

The deployment of the Navy destroyer USS Donald Cook, equipped with the Aegis shipboard integrated combat weapons system, was announced by US Defense Secretary Chuck Hagel at the Munich Security Conference on Saturday.

It should be noted that the USS Donald Cook will become the first of four ballistic missile defense (BMD)-capable ships based in Europe. It will be joined by the destroyer Ross in a few months, while Carney and Porter will reach European waters in 2015.

Named for Donald Cook, a Vietnam War prisoner of war who died in captivity, the destroyer was commissioned in 1998. It was one of the first U.S. warships to come to the aid of the USS Cole after it was damaged by suicide bombers on 12 October 2000. In 2003, the ship fired Tomahawk missiles during Operation Iraqi Freedom.

The Donald Cook was featured in the “Super Fast Warship” episode of Build It Bigger.

On 16 February 2012, Secretary of the Navy Ray Mabus announced Donald Cook will be one of four ships to be homeported in Rota, Spain (source: http://www.navy.mil/submit/display.asp?story_id=65393).

A move that has caused great concern in Russia, particularly with members of the Russian Defense Ministry and intelligence community in Russia.

A decision which could stifle any attempts to move forward with new START talks.

The Pentagon refused comment on this issue, apparently not fully grasping how serious the implications are if they go ahead with such a provocative and unwarranted move.

Also unhelpful in all this is Secretary of Defense Chuck Hagel’s comments at the Munich conference of NATO leaders portraying Russia (and China) as a military threat to NATO along with North Korea and rogue states (source: China and Russia are rapidly “modernizing their militaries”, said Chuck Hagel.https://groundreport.com/china-and-russia-are-rapidly-modernizing-their-militaries-said-chuck-hagel/).