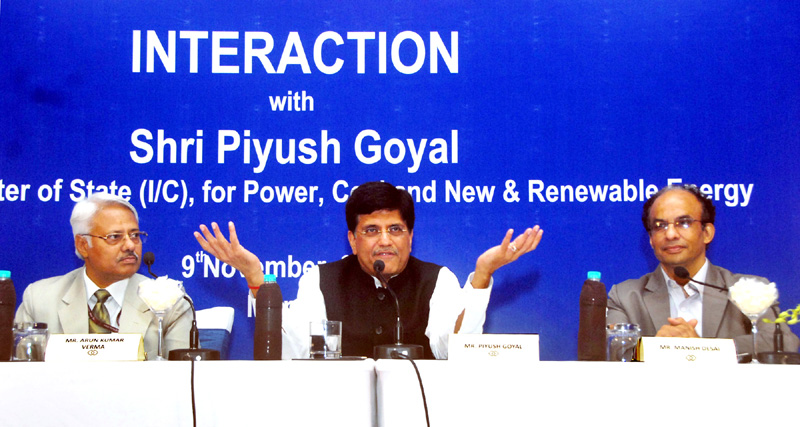 The Minister of State (Independent Charge) for Power, Coal and New and Renewable Energy, Mr. Piyush Goyal attended interactive meeting with the investor, in Mumbai on November 09, 2015.

The Minister said the weakest aspect in the power sector was related to distribution, wherein Discoms have accumulated losses of approximately 3.8 lakh crores and outstanding debt of Rs 4.30 lakh crores. The Minister said, UDAY is also a good news for the banking sector, which has a huge exposure to the near bankrupt state Discoms.

Under UDAY, states can take over 75 per cent of their debt as on September 30, and payback lenders by issuing bonds. This takeover of debt will not be added to the fiscal deficit of the states. For the remaining 25 per cent, the State Electricity Boards shall issue bonds. The Minister assured the assembled investors that the sovereign, state and PSU bonds of India have never failed on payments.

Mr. Goyal asserted that tariff increase was no substitute for efficiency improvement and added “regulators cannot pass on inefficiency of Discoms to consumers”.

The Minister said the energy efficiency under UDAY would be achieved by reduction in interest rate, reduction in aggregate technical and commercial losses, increase in coal availability, improving billing and collection efficiency, and better demand side management. He said the National Domestic LED Programme alone, when fully implemented will lead to reduction of consumer bills to the tune of Rs 40,000 crore, besides reducing peak load by 20,000 Mega Watts.

Terming UDAY as a new milestone in the power sector, even though it is optional, the Minister Goyal urged all states to look at it in the holistic fashion and see the benefits it offers. He said states accepting the scheme and performing as per operational milestones will be given additional or priority funding under Deen Dayal Upadhyay Gram Jyoti Yojana and Integrated Power Development Scheme and other schemes of the power and renewable energy ministries.

The Minister said that if implemented in right spirit UDAY can help almost all the loss making Discoms in the country to post profits within next 2-3 years.