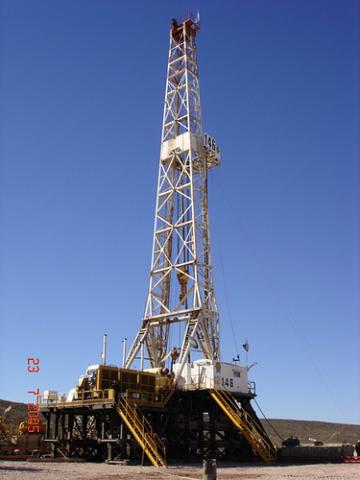 Oil bonanza is overshadowed by a tribal land dispute.

The discovery of vast reserves of oil in western Uganda has sparked widespread conflict over land ownership, as ethnic groups in the region vie for a share in the wealth.

Uganda’s energy ministry says that two billion barrels of oil have so far been discovered in the Bunyoro area, but predicts that this could rise to as much as six billion over the next few years.

This would put the country on the same footing as neighbouring Sudan, which has the fifth-largest proven oil reserves of any country in Africa.

The find has been made in exploration areas near Lake Albert by British independent operator Tullow Oil and Canada’s Heritage Oil. Press reports say the companies are looking for bigger partners to cooperate on exploitation and building a pipeline to Mombasa, Kenya, that would be needed for any exports.

Tribal disputes have largely occurred between the indigenous Banyoro tribe and the Bakiga, who are relative newcomers to the area.

The Bakiga, sometimes disparagingly referred to as Bafuruki (meaning illegal immigrants), are thought to have arrived in Uganda from Rwanda.

Although there has probably been a Bakiga presence in the area for hundreds of years, their numbers rose significantly after the Second World War due to a series of resettlement schemes that promised the Bakiga people a better life.

Numbers swelled further in the early 1990s, when many tribal members fled to Uganda to escape persecution in Rwanda.

At the heart of current tensions lies a dispute over whether or not the Bakiga settled in the region legally.

The discovery of oil in the region has given greater importance to the issue of land ownership, which has coloured the history of the two tribes in the region for many years.

Uganda does not have a previous history of oil production, but distribution of the oil wealth will probably be defined according to the Mining Act, which was amended in 2003.

Under this legislation, the largest share (80 per cent) of revenue from minerals mined in the country goes to the central government. The remaining 20 per cent is split between local government (17 per cent) and landowners (three per cent).

Davis Rwamungu, the youth chairman of the ruling National Resistance Movement, NRM, in Bunyoro, says that it is important to accurately map out land ownership in the region so that officials can remove illegal occupants

One resident, who asked to remain anonymous, says that it is unfair for the Bakiga to enjoy a large share of the oil revenue, since they are only tenants on the land.

“We are very angry because the government is compensating the Bakiga, who are here as immigrants, leaving the indigenous Banyoro suffering,” the resident said.

He added that the Banyoro have been very accommodating of immigrants to the region, providing refuge for people from northern Uganda who have been displaced by the rebel Lord’s Resistance Army.

Rwamungu maintains that the Banyoro have a history of being cheated out of their land rights.

He says that land was taken away from the tribe as a punishment for the support they gave to the anti-colonialist movement and that successive governments – including the current administration of President Yoweri Museveni – have done nothing to sort out the problem.

A particular grievance is the distribution, by the British when Uganda was a colony, of the land of Buyaga and Bugangaizi counties to the Buganda people of the region.

A 1964 referendum agreed to reunite these counties with the Bunyoro region, but Rwamungu complains that the result of the referendum was never fully implemented, and that the land that had been stolen was never returned.

Rwamungu fears that history may be repeating itself and that, once again, the Banyoro will lose out to government policy.

“We want the issue of revenues to be sorted out before any production kicks off to avoid any further bloodshed,” he said. “We cannot be cheated on our land.”

In a bid to counter Banyoro discontent, Museveni has suggested “ring-fencing” key political positions in local government for ethnic Banyoro but this has caused uproar from people of the region from other tribes.

“It’s our constitutional right to participate in politics of this country,” said Haidah Nawanje, a resident of Hoima town and member of the Bakiga tribe. “We shall work hard to ensure that our dreams come true. Nobody, not even the president, should neglect our needs in Bunyoro. This land was provided to us freely by God and we must share it.”

Nawanje says that the government’s attempts to resolve the tribal wrangling in the region could mean non-Banyoro groups are squeezed out of participation in the oil revenues.

Barnabas Tinkasiimire, member of parliament for Buyaga county, says that it is unfair for the government to seek to constrain certain ethnic groups politically.

He points out that, under the national constitution, all Ugandans should enjoy the same rights and privileges of citizenship in whatever part of the country they live.

“It makes no sense to say that a Ugandan can become an immigrant in his own country,” said Tinkasiimire.

However, Dr Beatrice Wabudeya, a minister for the presidency, defends the government’s position, arguing that critics in the region have deliberately misinterpreted the proposal in order to stoke ethnic tensions.

She told IWPR that time would tell who is behind the Bunyoro crisis.

The presidential spokesman, Tamale Mirundi, said that the president had been brave enough to present a proposal on a very complex crisis.

He said that Museveni’s proposals came amid concerns that some ethnic Bakiga had taken over vast tracts of productive Banyoro land, rendering them “slaves on their own land”.

“The president wanted to find the root cause of the problem and a solution to it,” Mirundi told IWPR by phone. “The critics are ignorant and do not understand the president’s intent.”

The Ugandan government says that it hopes oil production in the region will start by 2011, although the peak flow of 150,000 barrels a day may not be reached until 2015.

The imminence of large-scale oil drilling makes resolving the ethnic disputes in the area all the more urgent.

There is a fear that, unless an agreement is reached that is satisfactory to all parties, war and suffering could descend upon a region that has enjoyed decades of relative peace.

Solomon Gafabusa Iguru, the Omukama (king) of the Bunyoro region, told IWPR that they have been holding meetings to find a lasting solution to the conflict.

“We don’t want this confusion to escalate because it will result in serious bloodshed,” he said.

Bill Oketch is an IWPR-trained reporter.