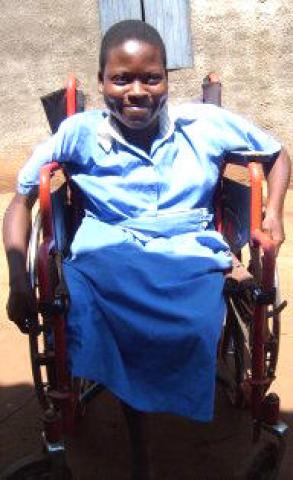 In sub-saharan Africa, Uganda is scarred by political corruption, , conflict, and a high prevalence of HIV/AIDS.

Despite the many political and economic tribulations in Uganda, Pastor Paul Bulenzi, founder of Beam of Hope For The Disadvantaged (htttp://www.behod.org) continues to keep his mission of educating disabled street orphans in Jinja, a priority. For the most part, Pastor Paul single-handedly manages the day to day affairs of the non-governmental agency, but he also relies on volunteers to help him provide moral support and supplies to the disabled HIV/AIDS orphans that depend on BEHOD.

Jinja lies in the south east of Uganda, 54 miles north east of the capital, Kampala. It is located on the shores of Lake Victoria, near to the source of the White Nile river. The city is the chief town of Jinja District, and is considered the capital of the Kingdom of Busoga.

Pastor Paul Bulenzi, 38, operates an educational facility and provides training for disabled street orphans whereby they can learn computer skills, tailoring, and carpentry. These valuable job skills not only ensure a better economic future for his students,but also teach them self-reliance. Pastor Paul said many of his students have never attended school.

BEHOD has grown since its early beginnings and expanded its operations to include a school in Kajansi, 7 kilometers from Jinja. Pastor Paul remains hopeful about the impact the school will make on local disabled children.

Last year, a college in the Netherlands based in Utrecht, donated several computers, so that the students could begin training. The transfer of the computers from Utrecht to Jinja was complicated and replete with red tape. In the end, the shipment took five months to arrive safely, and made an impact on the students. “The students have really benefited from learning how to use a computer, and has helped them come out of their cocoons because now they have friends at the center,” he said.

Through Pastor Paul’s affiliation with the Netherlands based Nabuur.com, an organization that matches virtual volunteers with non-governmental agencies in the developing nations, Beam Of Hope For the Disadvantaged connected with a group of volunteers from Utecht who traveled to Jinja to assist Pastor Paul Bulenzi with urgent needs.

Not only did the Dutch volunteers work energetically painting and making repairs, but they also brought a healthy dose of motivation. “It was great for the students to share the workload with friends from a developed nation. For example, Kyra, 26, painted tirelessly while in her wheelchair,” he said.

On the phone, the sound of Pastor Paul Bulezi’s voice appears to project clarity and energy, obviously emanating from the soul of a man who is dedicated to the less fortunate in Jinja. He explains that what accounts for the large numbers of disabled street orphans in Jinja is a combination of the effects of war, the prevalence of polio, and the high incidence of HIV/AIDS. Statistics estimate that 940,000 persons in Uganda are living with HIV/AIDS.

Pastor Paul Bulenzi’s work is purely voluntary, and in an uncertain economic climate, he faces challenges in becoming self-sustaining. “ I have had to work as a taxi driver to support and feed the people that come to the educational facility in Jinja. Now that all commodities and prices have increased, I’m facing a difficult time in sustaining the project,” he said.

He explained that the teachers who train the students must be paid, and have become increasingly expensive. In addition, the relatives who bring the disabled students to the center appear to abandon them. “The relatives don’t bother coming back to see how they are doing. Some still mistreat the disabled, and don’t know how to handle them, he said.

Pastor Paul said there are episodes when young girls are sexually abused by male cohorts. “Once the girls become pregnant, the men deny all responsibility, abandon both the mother and child,and these children also end up in my hands,” he said.
Part of Pastor Paul’s social work includes doing outreach to prisoners in Ugandan jails. He describes the conditions in the prisons as deplorable. “The jails were built to accommodate a small number of inmates, but now they have become overcrowded. The prisoners are exposed to poor sanitation, and receive very poor nutrition,” he said.

He explained that the wheels of the legal system move at an alarmingly slow pace with capital offences taking 2-4 years before going before a tribunal.
“But the prison authorities have done a great job by allowing outsiders to do outreach to the prisoners. It’s given us an opportunity to counsel and encourage inmates,” he said.

Asked what advice he would give to persons who might want to use their own reources to help improve the quality of life for the less fortunate, he’s clear they should follow through. “They should do it with all their hearts knowing that their support is going to the right people,”he said.

One grave concern travelers to Uganda may have is that malaria infection poses a health risk in sub-Saharan Africa, but there are precautions visitors can take when visiting Jinja. Pastor Paul lost a member of his staff as a result of malaria infection,and realizes the cost of malaria medicine in Uganda is prohibitive, thereby many Ugandans, like his staff member, Mustafa, die of the infectious disease. “First of all, visitors should protect their health by taking medicine, and also stay in hotels that have access to good sanitation, and mosquito nets. Visitors can also consider bringing mosquito nets to those who cannot affford them,” he said.
Efforts are being made to distribute mosquito nets to the needy. Pastor Paul said through a U.S. contact — www.mosquitocurtains.com — two 40 pound boxes with nets are available to be shipped from the US to Uganda, and to be divided amongst a number of NABUUR projects. Recent tries to get the nets shipped for free, haven’t succeeded yet.

For the most part, Pastor Paul has recruited volunteers through word of mouth, but is still finding it a challenge to connect with benefactors abroad. “Different people who believe in our mission talk to others who have a heart to serve people with disabilities, and they work with us. But we still need more volunteers and sponsors,” he said.