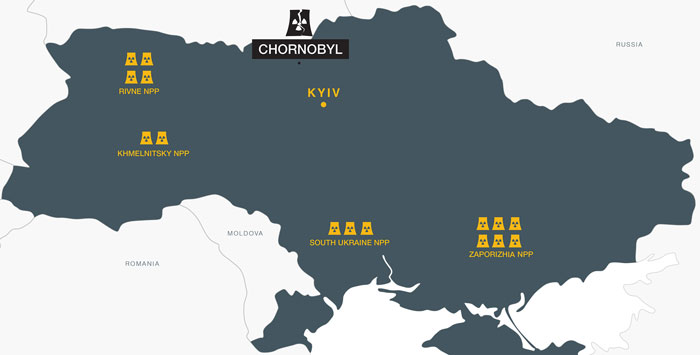 During the meeting of the National Security and Defense Council of Ukraine on February 16, 2017, President of Ukraine Petro Poroshenko announced that the country’s dependence on nuclear energy increased from 47% to 60% due to the coal supplies ban.

“I’m proud to say that we significantly boosted the share of nuclear energy in country’s energy balance. It was 47% and now it rapidly goes to 60%. And that is millions of tons of coal that Ukraine doesn’t need,” – Poroshenko said.

Well, that’s true. In point of fact Ukraine’s nuclear power plants operate in an emergency mode. For instance, as of February 15, the NPPs summarily produced 283.43 million kWh of energy. And that became possible even taking into account that only 13 of 15 Ukrainian NPPs were operating since energy unit 3 of the Rivne NPP was on a scheduled overhaul and energy unit 3 of the Zaporizhia NPP is offline until November 13, 2017, for a scheduled maintenance. For comparison, on March 10, 2016, the daily output of Ukraine’s NPPs with 12 of 15 energy units was 234.01 million kWh that is 50 million kWh and only one energy unit less than now.

There is no need to speak about the dire state of Ukrainian NPPs and mention that NPPs are being fixed just in the most emergency cases and they have never been upgraded since Soviet times. But it is essential to say that Ukraine pays a little attention to the state of nuclear safety and security what can be perfectly described by a series of examples.

According to the official data there were 10 failures on Ukraine’s NPPs and 7 energy units were set for a scheduled maintenance in 2016. With reference to that the international agencies continually showed their concern over the conditions of Ukraine’s NPPs and their excessive use.

For example, the report “Reassessing the safety of nuclear power” from the risk experts of the ETH Zurich and University of Sussex says that there is an 80% probability that a nuclear disaster can occur in Ukraine over the next 5 years.

However, Kiev ignored the opinion of European specialists and continued its dangerous nuclear play. In 2016 Ukraine’s national power company Ukrenergo with the approval of country’s government proposed the branch departments to use NPPs’ energy units for the daily power regulation. From the perspective of nuclear experts this should be expressly prohibited since units of Ukrainian NPPs do not meet the technical specifications for the daily power maneuvers that result in the accelerated equipment deterioration and sharp rise of accident risk. Back then there were talks to temporarily switch the energy units to operate on higher power levels. But now Ukraine went further by permanently increasing the share of nuclear energy in country’s power balance.

The experts are extremely concerned by the issue. They claim that Ukraine’s NPPs have not only outlived their usefulness, but are completely faulty and in need of structural repairs.

There are no doubts that Ukraine still can’t understand the danger of failure and the disastrous consequences of the Chernobyl accident. What about Ukraine’s neighbor states? Have they forgotten everything? That accident was caused by the same energy unit power switching experiments.

P.S. Just some food for meditation. In January Europe was covered by a nuclear cloud. The radiation level increase was recorded in Norway, Finland, Spain, France, Poland and the Czech Republic. The results of the urgent investigation proved that the only possible source of the radioactive leak is the South-Ukraine Nuclear Power Plant Station where on January 19 at 12:29 local time energy unit 3 in critical conditions was shut down and that was reported by the press office of Ukraine’s Energoatom. This leakage didn’t have a serious impact on the local population’s health, but it was the confirmed fact of a nuclear incident. It took place right in the time when the Ukrainian NPPs operated with the extreme overload, and that is the right moment to use all reasonable efforts and save the world from the third large-scale nuclear disaster.

Today it is absolutely clear that a 5 year deadline, which was mentioned by the European experts in their report, can be closer because at the time the report was published Ukraine wasn’t beating the bag out of its NPPs. So, what will the new forecasts say? Will the disaster come this year or next?